“Richard Joseph Chalet, 73, passed away in Hobe Sound, Florida surrounded by family on December 1, 2018 after a brave battle with pancreatic cancer. He is survived by his wife of 53 years, Marianne, his daughter Christine Georgeadis, son-in-law Stavros and grandson Ethan of Palm Beach Gardens. He is also survived by many more loved ones including his sister Elaine Sheeran and husband James of Plymouth, MA, his nieces Elizabeth Murray (Christopher), Caroline McDermod (Matthew), Catherine Cairns and three great-nieces and two great-nephews, all from the Boston area. He is preceded in death by his sister Patricia Cairns (Richard) of Hanover, MA. Richard leaves behind his beloved dogs, Charlie, Joey and Sammie. Born in Boston, MA on January 30, 1945 to the late Nathan and Dora Chalet (DeRosa), Richard, to all that knew him, was a good-natured and caring husband, father, grandfather, brother and friend.

Richard grew up in Weymouth, MA and married Marianne (Connelly), his high school sweetheart in 1965. They had their daughter Christine a year later. Their love story spanned over 50 years with Marianne being the Yin to his Yang. Leaving the comfort of family in the Boston area, they left for Cleveland, OH in 1969 to embark on a new life and new business opportunities. It was in Cleveland that Richard founded Alcon Industries, Inc. with close friend Tom Waldin in 1977. Alcon has since become America’s leading producer of heat and corrosion resistant alloy castings and fabrications. Although he “retired” to Florida in 1992 his devotion to his company and his employees continued until his passing. Richard and Marianne spent many years traveling the world, enjoying great food and wine with their close friends Tom and his wife Epp Waldin. Richard enjoyed golfing with his buddies and his weekly poker games. He loved watching action movies and was a lifelong fan of the New England Patriots and the Boston Red Sox. Richard’s love of dogs began while growing up in Weymouth, where he rescued Scamper Dog from the local pound. This was a constant theme in his life as his wife Marianne brought home many special needs dogs for “temporary fostering” but they always ended up staying since Richard could never say no. Their love of animals always resulted in a houseful of rescued dogs. Most of all, Richard loved spending time with his family and was especially proud of his grandson Ethan.

In lieu of flowers, memorial donations may be made to the Pancreatic Cancer Action Network (pancan.org) or an animal rescue site of your choice. A Funeral Mass will be held on Monday, December 10th at 11:00am at St. Christopher’s Catholic Church, 12001 SE Federal Hwy, Hobe Sound, FL. Burial will follow at Riverside Memorial Park, 19351 SE County Line Rd., Tequesta, FL. The family will greet friends from 4-8pm at Taylor & Modeen Funeral Home, 250 Center Street, Jupiter, FL on Sunday, December 9th.” 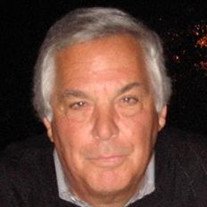