“Over the summer, Bodycote opened a new facility on the Advanced Manufacturing Park (AMP) in Rotherham to support the aerospace and power generation markets in the UK and Europe. The move followed a contract win with Rolls-Royce’s Civil Aerospace business that is expected to be worth over £160m in incremental revenues over the 15-year period. Sales will ramp up over the next five years. Rolls-Royce also has a manufacturing facility on the AMP. For the four month period October 31 2018, Bodycote reported group revenue of £243.5m, 5% higher than the comparative period last year. Civil aerospace revenues grew strongly at 14% compared to the same period last year, with North America and Western Europe both registering good growth. The Macclesfield-headquartered firm said that this reflects increasing output for the LEAP program (work for Safran Aircraft Engines) and “an easing in the OEM supply chain bottlenecks for Titanium castings.” Bodycote is featured in the latest issue of Manufacturing Today. On the Rolls-Royce deal. Stephen Harris, CEO at Bodycote, told the publication: “As it is a sole source contract we are operating under, meaning that we are Rolls-Royce’s only supplier for thermal processing on particular components, we have to meet certain standards, in terms of capacity. In order to achieve that, we opened our latest UK facility in July 2018, in the Advanced Manufacturing Park, in Rotherham, where we offer numerous heat treatment processes, the principal ones being HIP and vacuum heat treatment. “The good news is that we have already started expanding the new site, shortly after we built it. Rolls-Royce is not the only customer available to us; we are looking to support other clients, too, but at the moment, Rolls-Royce is especially demanding for our services, which is helping the Rotherham factory grow very fast.” The most advanced turbine blade casting facility in the world was officially opened by Rolls-Royce in Rotherham in 2014. The 150,000 sq ft facility employs around 150 people and has the capacity to manufacture more than 100,000 single crystal turbine blades a year.” 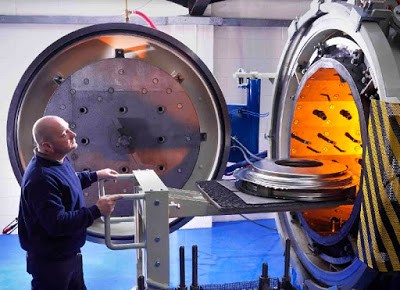