Why Aerospace Heat Treating is Going to Slow Down

From the Wall Street Journal comes the summary below about current and future aircraft sales for Boeing and Airbus. For the captive and commercial heat treating industries this could perhaps be more aptly entitled “Why Aerospace Heat Treating is Going to Slow Down”. To date many of the heat treaters we have spoken to who concentrate on the aerospace industry have reported sales to be good, however looking at these forecasts tell the story that at some point they will slow down.

“The travel slump has coincided with continuing delays in returning the 737 MAX to service, with customers canceling orders for 150 of the jets in March, and Boeing said Tuesday it had downgraded the status of some existing deals because of airlines’ weakening financial health. Boeing and rival Airbus SE still have orders for almost 13,000 jets placed over the past few years and have started to cut production rates in response to the collapse in global airline traffic caused by virus-related travel restrictions and the resulting economic slowdown. Both plane makers are expected to suffer more cancellations as some airlines are expected to collapse because of a crisis that analysts expect to cost at least two or three years of growth. The International Air Transport Association on Tuesday forecast global passenger numbers would fall 55% this year compared with 2019. The trade group’s revised estimate includes a limited recovery in some domestic markets starting in the third quarter. Boeing’s March cancellations come ahead of a window for some customers to cancel orders without onerous penalties because of contracts that allow them to walk away from deals if planes are a year late, said aviation bankers. The company is expected to update investors on its orders, compensation to MAX customers and continuing efforts to strengthen its balance sheet when it reports quarterly earnings April 29. The MAX cancellations in March came from a variety of customers, including 75 from lessor Avolon Holdings Ltd. and 34 from Brazil’s GOL Linhas Aereas Inteligentes SA . It didn’t lose any deals for larger wide-body planes. The airline industry’s deteriorating financial health led Boeing to downgrade orders for another 163 jets, including 139 of its MAX aircraft. It still has contracts to sell the planes, but they have been removed from its firm backlog because of a reduced expectation they will be delivered. It ended the quarter with 5,049 firm orders.

March deliveries included 11 787 Dreamliners, three 777s and two 767 freighters. It also handed over three KC-46A military tankers and a P-8 surveillance jet to the U.S. Navy, which ordered 18 more of the planes last month. Boeing this week restarted limited production of the military versions of its commercial jets at a facility near Seattle following a temporary closure because of virus-related travel and work restrictions in Washington state. Production of commercial jetliners in the state and at a separate facility in South Carolina remains shut down indefinitely. Boeing secured orders for 31 jets last month, more than half of them from the Navy, with previously announced deals for a dozen 787s from All Nippon Airways parent ANA Holdings Inc. and a single 767 freighter from FedEx Corp. Its shares closed down more than 4%. Airbus last week said it delivered 36 aircraft in March, down from 55 in February. It booked net orders for 21 jets after 15 cancellations. The company said it would cut production rates by about a third.” 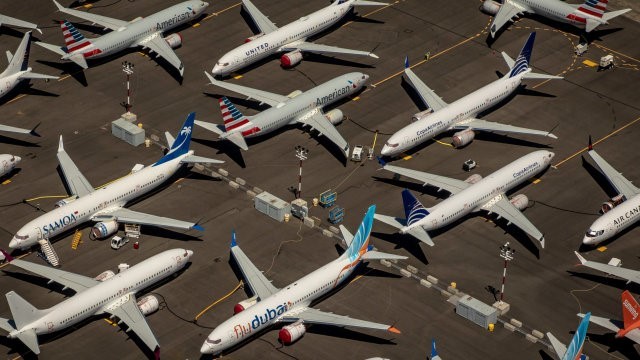