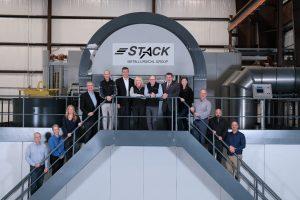 ​Since 1999 “The Monty” has been publishing annually a list of the largest commercial heat treaters in North America based upon annual sales, our 2021 list can be found at https://themonty.com/project/50-largest-north-american-commercial-heat-treats-2021-2/ This year readers will see we became much more ambitious and expanded the list to the 50 largest. In our 19th spot we have Stack Metallurgical.

Stack Metallurgical Group consists of four sites strategically located throughout the Pacific Northwest.  Stack specializes in advanced heat treating, aluminum anodizing and painting, and hot isostatic press (HIP) services. With a rich history dating back to 1946, Stack has become a trusted partner to demanding clients in industries such as aerospace, power generation, precision cutlery, oil and gas, and general industrial.  Stack has been privately held by the Ederer family since 1974.  Over the last 46 years, the business has grown and expanded into new markets.  The most recent expansion, Stack HIP, was launched earlier last  year in Albany, Oregon.