For years now furnace builder SECO/WARWICK has been the target of a viscous, anonymous e mail campaign. Literally 1,000’s of companies from around the world involved in the heat treatment industry have been receiving these e-mails, today SECO addresses the issue.

“As one of the top five heat treatment leaders and an entity involved in the world economy, SECO/WARWICK confronts numerous challenges in everyday business life. Currently, such a challenge has become the network, specifically Internet hate.

The Internet is a huge environment that can help but also harm, because it allows anonymity of the recipient and sender, including certain anonymous vilification that SECO/WARWICK has experienced. Initially, our partners, suppliers and contractors received e-mail correspondence alleging alarming and misleading information about the situation of the Group. Now employees and customers have joined the group of consumers flooded with black PR. We are concerned that after a wave of hate sent to customers, hate speech on the Internet will start. SECO/WARWICK says NO to this prospect.

Almost every entity operating on the market has a presence on the Internet where it builds its reputation every day and confronts the opinions of the environment. SECO/WARWICK consciously uses the Internet to create and manage content, applying a  great  deal of effort in it, because we care about a reliable and positive perception and representation or our brand.

“The author, writing under a pseudonym (currently as: Suresh Manish) and attacking SECO/WARWICK, is the so-called internet troll who wants to discredit our company’s activities and arouse controversial discussions. According to specialists researching the phenomenon of online hate, such a person feeds his low self-esteem, harms someone who is jealous or stands in the way of his alleged success. Our online troll, by providing information extracted from the context and presenting it in a selective manner, manipulates the facts. This attack is an act of economic hate,” says Sławomir Woźniak, President of the SECO/WARWICK Group.

It is not the competition that works under the pseudonym, but one of our former contractors, who formulates unfounded claims and negative opinions, and then slanders and sends this information to a wide audience. SECO/WARWICK is pending litigation against this contractor, but it turns out that legal sanctions for violating our good name and reputation are not relevant to the author of the email. Despite the conviction, he continues to slander the company, which is done, among other means, via anonymous e-mails which, although not identified explicitly, suggest the authorship of the entity: a former contractor who has been in litigation with SECO/WARWICK for many years. The operating scheme and the way the wording is formulated clearly indicates that the emails are authored by the same and former SECO/WARWICK contractor.

We will fight these anonymous slanders, because the good name of the company and its employees is vilified, and the information itself misleads our partners. As a listed company, SECO/WARWICK is guided by the principle of transparency in business, relations and communication. We are not anonymous in what we do, because we believe that the facts speak for themselves.

“Cyber-bullies who feed on the possibility of making others’ lives miserable are a very severe phenomenon and I am sorry that the sign of the times is affecting such a reputable company as SECO/WARWICK” says prof. Jolanta Baranowska from the West Pomeranian University of Technology.

“I have cooperated with SECO/WARWICK Group for decades. This is the first time I have met a situation in which a global leader must defend itself against online frustration. A wave of hate poured out by this man hiding under a pseudonym offends and touches us, the scientific support team of the Group,” comments prof. P. Kula from the Lodz University of Technology.

“As heat treaters we all work hard to promote the many benefits of our industry and spread the word that we are the most cost-effective solution to the needs of manufacturing. The last thing we need or want is unnecessary distraction, especially from an unknown source questioning our motives and damaging our industry’s reputation” wrote Daniel H. Herring, “The Heat Treat Doctor.”

“Over my long career, I have had the privilege of working with most of the original equipment manufacturers (OEMs) worldwide and many of our suppliers as well. Each is highly ethical, acts in a professional manner and, simply stated, have their hearts (and focus) in the right place, serving the industry we love. SECO/WARWICK, both here in the United States, in Europe and around the world is no exception. Any attempt by anyone to suggest otherwise detracts from our ultimate goal, the advancement of the thermal processing industry so as to offer our customers the best tools to succeed. In this way, we all serve our better angels”, added Daniel H. Herring.

Nobody wants to be publicly defamed, because destroying reputations affects employee morale, business, decisions of potential clients and partners, or can weaken relationships. But SECO/WARWCIK, with a faithful group of suppliers and customers in 70 countries, and always taking care of relations with partners, can boast and show that in this situation our partners are with us.

“This defamation is an offense that involves slandering a company that could expose it to loss of credibility and trust. We have not lost confidence in SECO/WARWICK; we believe and confirm its credibility and the credibility of its devices. Proof – years of collaboration and dozens of solutions for this brand,” says Mike Jarvis, Engineering Director, Wallwork Heat Treatment Ltd.

“After receiving the e-mail, our reaction was to forward correspondence to SECO/WARWICK without asking us to explain the matter. Because we do not respond to anonymous correspondence. As a transparent company, we require transparency from partners and those who want to be in dialogue with us. Anonymity does not embrace dialogue or transparency,” comments Sebastien Matray, GAUBERT MATRAY INDUSTRIES CEO.

“We were surprised by the correspondence received and the information contained therein. The surprise was all the greater because we’ve been working with SECO/WARWICK for 10 years, on 10 projects. We know who our contractor is and our relationship has long since we crossed the threshold of partnership and are now at the stage of business friendship. As a friend, we tell the hater – NO”, noted Sylwester Pawęta, Chief Operating Officer and Commercial Proxy at HART-TECH.

“In response to the defaming emails sent about SECO/WARWICK, Rex Heat Treat has not experienced any out-of-the-norm difficulties in our dealings with the company. RHT has purchased standard vacuum furnaces, first of its kind vacuum oil quenching furnace, bell style tempering furnaces, and the tallest oil quenching vacuum furnace in the world from SECO/WARWICK. We have found the entire group to be professional and highly creative for our unique needs. Rex Heat Treat looks forward to our continued relationship and next purchase from SECO/WARWICK and SECO/VACUUM Technologies,” said Johnathan W. Rex, General Manager.

“Metals India and SECO/WARWICK relations are not impacted with such kind of communication as we have had a wonderful experience in the past and continuing through present day”, commented Ankit Gupta, Managing Director of Modern Metals India.

“I was extremely disheartened to read this slanderous correspondence about SECO/WARWICK. This absolutely does not fit the standard of business behavior. All the more so because working with SECO/WARWICK as a business partner is always a great pleasure, combined with mutual respect and trust; with such experiences, it is impossible to believe these accusations,” adds Magdalena Nizik, General Director of CPP Poland.

Although the presented circumstances are completely independent of the Company, we apologize to our partners for any inconvenience caused. We declare that we have taken legal steps related to the situation that misrepresents our situation to our partners. We are guided by the principle of transparency, one of the most powerful forms of defending the good name of the company and its employees. Thus, this public message from the Group.” 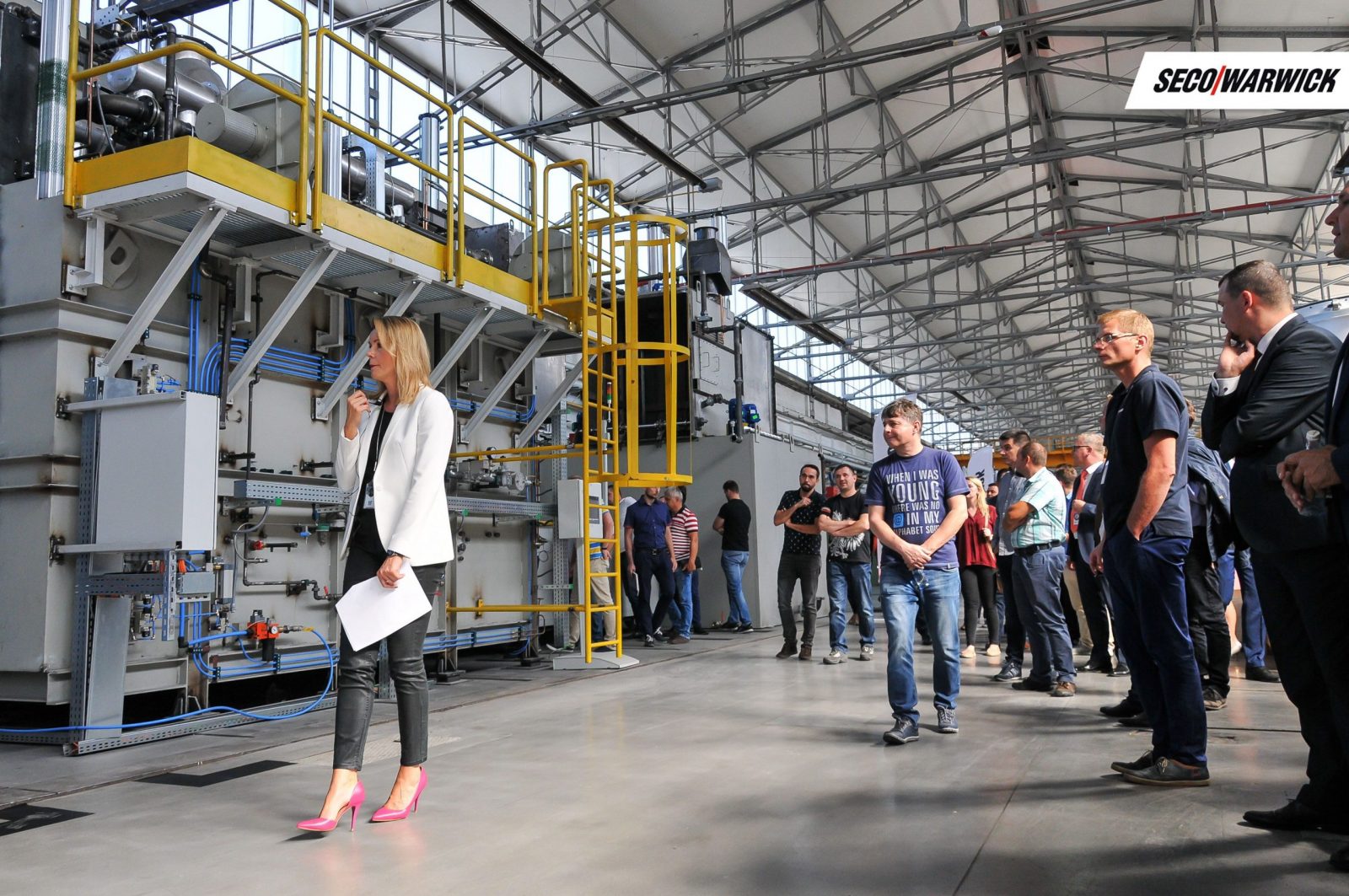