Bearing manufacturer, Schaeffler Group is known as one of the largest captive heat treaters in the world with heat treat locations almost literally around the world. Back in 2018 the company announced that they were making a major investment in their Joplin, MO facility-that investment is now complete. The investment includes press quenching, carburizing furnaces and forging capabilities.  A building that towers above the campus of a large Joplin manufacturer at the junction of Interstate 44 and Range Line Road is drawing attention.

“A lot of people have been asking, ‘What’s the new building out there by the interstate?’” said Matt Thompson, manager of the Schaeffler Group USA Inc. plant at 3900 S. Range Line Road. “It’s quite a building. We had to make a very tall structure for new forging equipment that’s going in there, bringing more capabilities back in-house and more production back to the U.S.”

At about 38 feet tall with square footage that nearly equals a half-acre, it is one of two buildings that have been enlarged for the plant’s heat-forging operations. It is part of a $56 million expansion project. Nearly three years ago, in late 2018, Schaeffler announced that Joplin had been selected from among its 73 worldwide plants to be the site of the expansion for its ball bearing manufacturing operations. According to Cynthia Norris, vice president of communications for the company, Schaeffler had identified four primary areas of investment to optimize the Joplin factory: forging capability; expanded heat treatment technology; improved efficiency throughput; and modernization of the factory building and support systems.

In addition to the new heat treatment expansion, the project has involved installing a carburizing furnace, a quench press line for fixture hardening, a large forge and additional forging lines. At the time the project was announced, company officials spoke to the Joplin City Council about their plans.

“This investment allows us to offer our customers even better service through faster delivery and shorter lead times,” David Thompson, president of the company’s North America operations, said then. “Equally important, our investment is a tribute to the incredible work ethic of the Joplin community, which has created a great place for Schaeffler to grow its business.”

It’s been a growing business in Joplin for 50 years. Formerly the FAG Bearings Corp., the plant was opened in 1970 to produce pump bearings for the automotive industry. In 1974, it started production of ball bearings for industrial uses. In 2008, the automotive production was moved to other plants operated by the company and the Joplin plant launched production of bearings for wind turbines. Six years later, the company added tapered roller bearings for railroad gearboxes to its operations. More than 1,117 finished parts for industrial products are manufactured there now by approximately 290 employees.

Matt Thompson said there is still more work to do to finish the expansion. The COVID-19 pandemic slowed some of the construction work and hampered equipment deliveries. He expects the project to be substantially complete by the end of the year. As that wraps up, the company’s efforts to attract workers has intensified. Other distribution and manufacturing operations brought to the city since 2018 have created more competition in hiring, the plant manager said. Terri Sherman, the human resources manager at the plant, said there are openings for 40 production workers created by the expansion project.

Company officials have been using all the resources they can think of to interest people in applying. They have attended job fairs, participated in community events such as this month’s Third Thursday in downtown Joplin, and even placed a huge banner on that tall building that people ask about. The company is offering a $1,500 sign-on bonus along with increased hourly wages and fringe benefits, Sherman said. One of the best recruitment methods the company has had is word-of-mouth by existing employees because of the company’s pay and benefits and its family-oriented culture. There are some workers who have recruited several members of their family to work there over the years, Sherman said.

“We wanted to share our story of the growth and expansion to encourage people to come and be a part of it,” Matt Thompson said. While the final phase of construction wraps up, “we have been doing a lot to try to draw the best we can find in the area to come and help run this new equipment.” 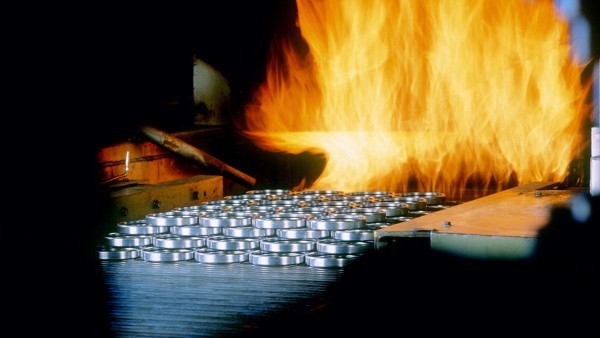