This is a very interesting news item on two different levels. First our understanding is that the new facility will include a heat treat department-one of those really high end vacuum aerospace departments that everybody gets excited about.

Second that this is a perfect example of a trend in the US manufacturing and consequently heat treating industries to move to the lower cost areas of the southern US. Labor costs are lower, taxes are lower, energy costs are lower and the weather is nicer to boot.

“Pratt & Whitney will build a 1-million square foot manufacturing plant in low-cost North Carolina, investing about $650 million and creating 800 jobs through 2027, the jet engine manufacturer and state officials have announced.

Pratt & Whitney did not approach Connecticut as a possible site for expansion, said a spokesman for the Department of Economic and Community Development. Commissioner David Lehman said Raytheon Technologies has advised the state the project will not affect jobs in Connecticut. “We have a strong and active partnership with Pratt & Whitney and its parent Raytheon Technologies Corp,” Lehman said Monday.

Raytheon Technologies sees shift of Pratt & Whitney work from Connecticut to North Carolina as one way to cut costs in the pandemic. Commercial aerospace revenue has fallen sharply during the COVID-19 pandemic as planes are grounded and travel restrictions drag on for months. Pratt & Whitney has imposed pay cuts, furloughs and laid off about 450 salaried workers in Connecticut.

Still, the East Hartford-based engine maker, a subsidiary of Raytheon Technologies Corp,. is looking to expand and be ready for growth after the coronavirus has passed. Turbine airfoils are a critical component in Pratt & Whitney engines “and demand will increase significantly as the market recovers over the next several years,” said Chris Calio, president of Pratt & Whitney. “We need to invest today to ensure that we have the infrastructure, production capabilities and workforce in place to meet future market demand,” he said.

Employee pay, while high in North Carolina, is lower than for unionized workers in Connecticut, according to a representative of the Machinists union in East Hartford. Another advantage over Connecticut could be the cost of electricity to run the massive plant, a business advocate said Monday. The factory will have an advanced casting foundry for production of high-pressure turbine airfoils for the next-generation geared turbofan and F-135 fighter jet engines. The supply chain has become a bottleneck, prompting manufacturers to bring the work in-house, said Chris DiPentima, president of the Connecticut Business & Industry Association.

Foundries consume a tremendous amount of energy, which is among the top five costs that manufacturers face, he said. Connecticut has been plagued by high electricity costs, a source of complaints not only by homeowners, but manufacturers that require power on continuously to run machines.

Jamison Scott, executive director of the New Haven Manufacturers Association, said Connecticut is a high-cost state competing with the Carolinas and Florida for manufacturers and other businesses. The state is still drawing tens of millions of dollars in investments from companies smaller than Pratt & Whitney that “see value in Connecticut and our labor force,” he said. Mike Stone, directing business representative of the Machinists union, which represents Pratt & Whitney workers, said it’s a shame the new venture will be outside Connecticut where the engine maker’s start coincided with the beginnings of commercial aviation in the 1920s. “Naturally, we get a little trepidation when there’s a downside,” he said.

Since 2014, United Technologies Corp., the predecessor to Raytheon Technologies, created 4,055 net new jobs in the state, including, Lehman said, at Pratt & Whitney and Collins Aerospace, its other aviation subsidiary that manufactures cockpit, cabin and flight equipment and other components.

Raytheon Technologies has nearly 18,000 Connecticut employees across its businesses, Lehman said. And from 2014 to 2019, UTC invested more than $4 billion in research and development in Connecticut.

The average annual salary for new jobs at the Asheville, N.C., plant is expected to reach $68,000, nearly 58% higher than the average wage in the area, but less than the pay scale for unionized Connecticut workers, Stone said.” 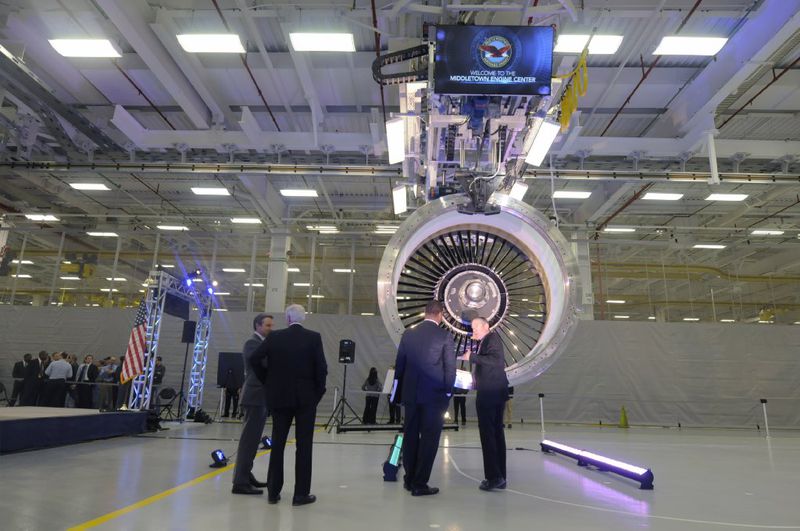