From “The Chronicle” we have this update on the recent fire at commercial heat treater Ohio Metallurgical in Elyria, Ohio, USA.

“ELYRIA, Ohio, USA — Employees at Ohio Metallurgical Service Inc. on Clark Street were back to work Tuesday after a fire destroyed a maintenance building on the property the previous night. State and local fire investigators and environmental specialists also were on scene, officials said, to determine what caused the blaze that did an estimated $1 million in damage to an unoccupied building and its contents. No employees were hurt after the fire started around 7:30 p.m. Monday. An Elyria firefighter suffered a minor injury but kept working through the blaze, officials said Monday.

Company owner and President John Gaydosh said he was overwhelmed by the “hundreds” of emails and phone calls his company received after Monday’s fire — from other local businesses, customers and even competitors offering “a lot of community outreach, thoughts and prayers and wishes.” Ohio Metallurgical Services Inc., or OhioMet, does heat treating of metals for the aerospace and aircraft production industries, among others. The company was founded in Lorain in 1947, moved to Elyria in the 1950s and was bought by Gaydosh’s father in 1977, he said. It currently has 75 employees working three shifts.

Monday was “a long night” and Tuesday “a long day,” Gaydosh said Tuesday. “We’re extremely happy there were no injuries,” he said. “The fire happened in a building not occupied at that time of day. It’s a maintenance employees’ office, storage, spare parts, machinery, not a production area of the plant.” Employees on the second shift were quick to evacuate the buildings that were occupied and call 911. The Elyria Fire Department was on scene “in about three minutes,” Gaydosh said, adding that he was impressed with the response time. The flames did not spread to other buildings or neighboring properties, and firefighters were present throughout the night. Clark Street was closed between South Logan Street and Abbe Road throughout the night.

The Ohio Fire Marshal’s Office and Elyria firefighters were back at the scene Tuesday investigating the cause of the blaze. State fire investigators typically are called in when there is a large amount of financial loss due to a fire. Gaydosh said he was able to answer investigators’ questions and provide them with video footage of the area where the fire started to aid in their investigation. “We have some video inside there, so we were able to see some of the progression of the fire, not in great up-close detail but it enabled investigators to kind of know where to look and start looking to determine the best they can how it started,” he said.

The Elyria Township, Carlisle Township, Sheffield and Lorain fire departments assisted the Elyria Fire Department at the scene, and Lorain County Homeland Security and Emergency Management also responded. Homeland Security and EMA Director Tom Kelley said the Ohio Environmental Protection Agency and Chemtron, an industrial cleanup company with facilities in Avon and Avon Lake, also were on the scene Tuesday — the former after being notified by county and fire officials and the latter to clean up some oil that got off the property, onto the street and into some nearby ditches during the incident.

Kelley said Ohio’s Community Right to Know law requires that an incident at a facility that uses, stores or manufactures hazardous materials report the incident to the state EPA, local fire department and local Emergency Management Agency. The law has been on the books for more than 30 years, he said. Gaydosh said he didn’t believe there were any signs of arson or “malicious behavior,” and that the cause appeared accidental, but it will take a final report to determine if that’s the case. “We’ll have to wait and see what they say officially,” he said. While the COVID-19 pandemic slowed business at OhioMet for a time, Gaydosh said the company will get back to normal.

“You just have to keep everyone safe and clean up and go ahead and rebuild and do your business. … The building is destroyed, definitely destroyed, but hopefully we’ll be able to salvage some things in there,” he said. “If there’s a blessing, it wasn’t a production area that was damaged. We’re basically back up and running already. Everyone’s working, no one’s being sent home, and they can push a broom if we need them to. There’s plenty to clean up. “We’re full steam ahead,” Gaydosh said. “We’ll get it taken care of and live to fight another day.” 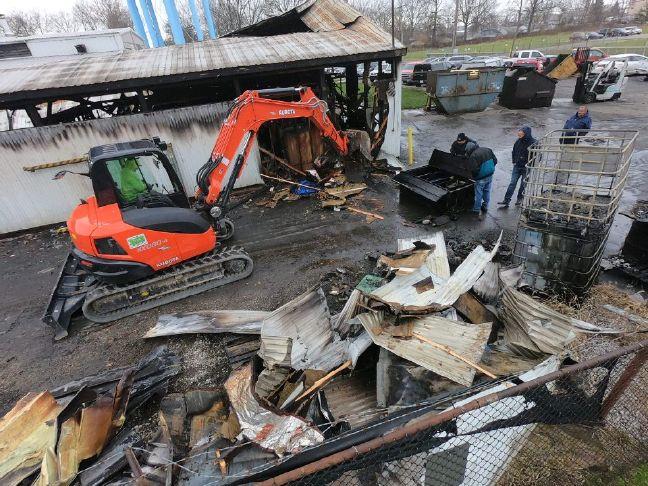