Now here is a rather convoluted but interesting story about the travels of a Surface Combustion Batch IQ furnace. A number of years ago Surface (a furnace builder in Ohio) built and sold a small electrically heated batch IQ furnace with working dimensions of 24″ X 36″ X 24″ to Timken Aerospace in Lebanon, New Hampshire, USA. The furnace worked well for a number of years until it became redundant Timken at which point it was sold to a gear manufacturer by the name of Trudo Inc., in Richmond, Quebec, Canada of all places-sale price at the time was roughly $40K, USD. Turdo was bought by another Canadian company by the name of Ontario Drive & Gear who had high hopes of turning the company into a captive and commercial heat treating powerhouse based on the very low electrical costs in Quebec. Well everything went bad and the heat treating department was closed down with the equipment going to auction yesterday. The furnace line was sold for $20K at the auction (by the way it was incorrectly advertised as being built in 2018, it was actually partly rebuilt in 2018 but remains a 40 year old furnace) although we are not sure who the actual buyer was. 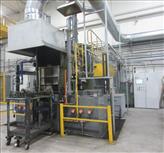