From international heat treat consultant David Pye pye_d@ymail.com we have an article about Nitriding.

The process Nitriding is a diffusion process and not a deposition process. It is a diffusion procedure that is reliant on a nitrogen source, and a low thermal process temperature (which, by looking at the Iron Carbon Equilibrium diagram is in the ferrite/cementite region of that diagram) just as the process of carburizing and carbo-nitriding processes are. 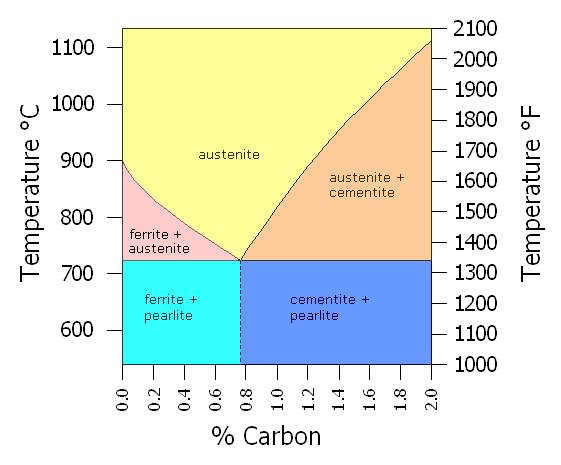 However, there are significant differences in the two surface hardening process techniques;

Machlet of Elizabeth, New Jersey was granted a process patent granted in 1908. The German metallurgist (Dr. Adolph Fry of Krupp Steel) was granted a European process patent in 1923. This led Krupp Steel to develop and market selected steels which were then known as Special Nitriding Steels or better known as the Nitralloy steels by Thomas Firth and John Brown Steels in the United Kingdom.

The process principle is based on the simple premise of the limits of solubility of nitrogen in iron. In other words, nitrogen will diffuse in the iron or steel very easily with the application of heat and will interact with the some of the alloying elements. (This also includes Iron)

The chemistry of the process is extremely simple and uncomplicated. The source of nitrogen is ammonia for gaseous nitriding. The surface reaction and the decomposition are as follows:

The initial decomposition is to separate the nitrogen from the hydrogen of the ammonia (nitrogen source). For a fraction of a second, the nitrogen is atomic, which will react with the steel being treated which then diffuses into the steel surface. The hydrogen acts as a dilutant gas and also a reducing gas to assist in reducing surface oxide contaminants. The steel surface acts as the catalyst to assist in the gas decomposition.

The ratio of nitrogen to hydrogen in the ammonia decomposes to a ratio of 1 part nitrogen to 3 parts of hydrogen. This is a very important observation to note when defining what type of formed immediate surface metallurgy is required for the application of the part being nitride. 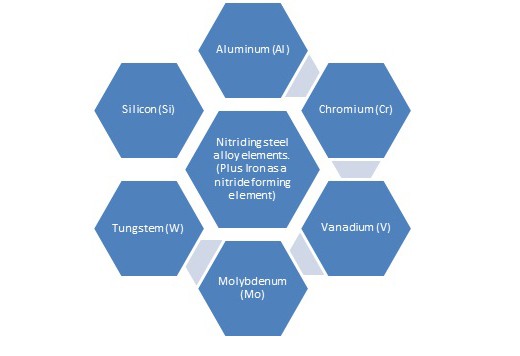 It should not be forgotten that Iron is also considered as a nitride former.  However the resulting nitrides do not exhibit high hardness values, but assist in the improvement of the steels resistance to corrosion.

At least 4 different, yet basic different methods of applying the nitride process to steel and are: 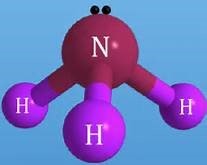 The decomposition of the ammonia to release both nitrogen and hydrogen diffusion is very similar with each of the above methods except with the Plasma nitriding. Time, temperature and material chemistry will also influence the; 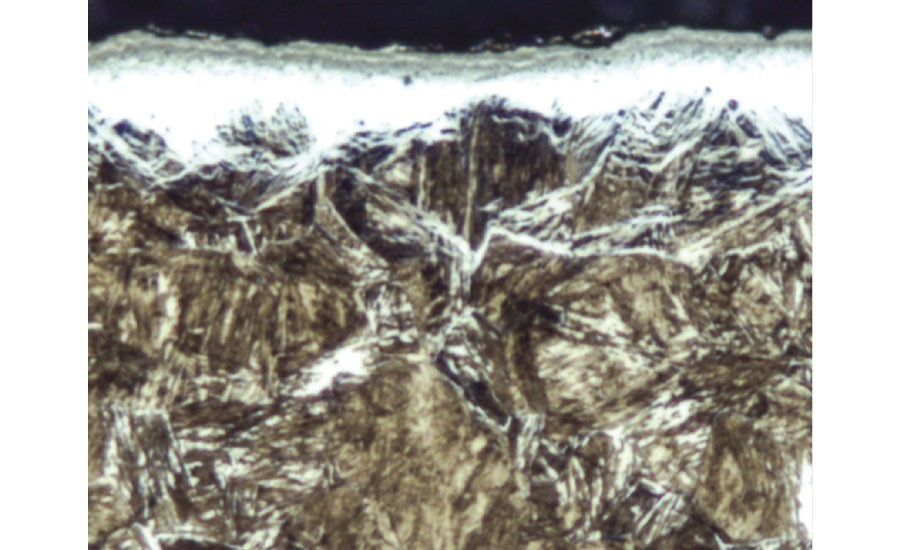 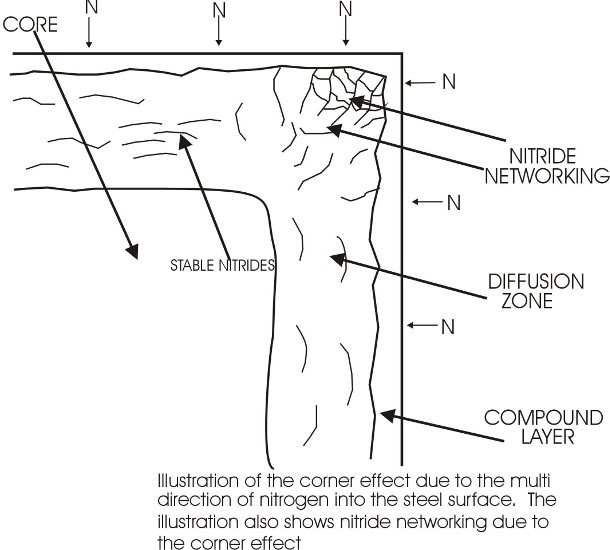 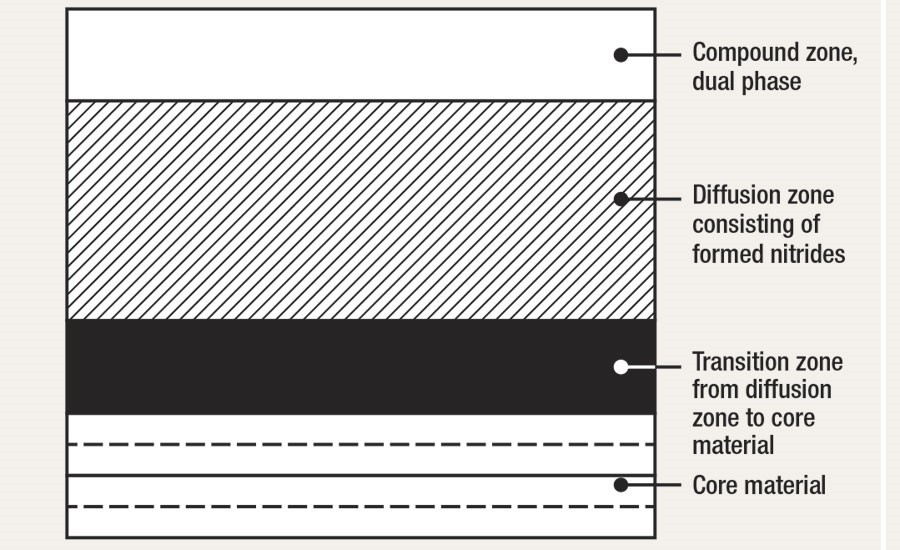 What do we understand as “plasma”? There are many forms of natural plasma,such as;

A simple generated fluorescent light is a plasma light source with can be colored by various internal gases. 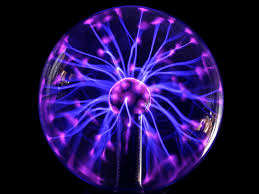 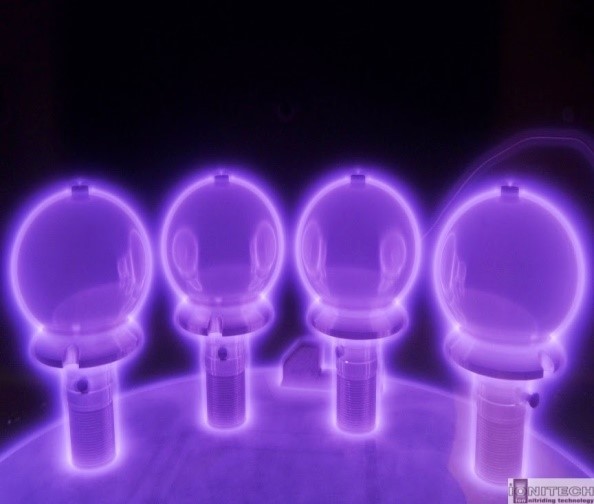 The thermal process requirement can be accomplished by Continuous DC generated Plasma, or be a combination of variable pulsed plasma, in conjunction with an electrical external heat source

Plasma nitriding has the distinct advantage of being able to control the ratio of nitrogen to hydrogen in order to control the resulting surface metallurgy of the nitriding process. The formed compound zone can be constructed of:

This can simply be accomplished, by control and adjustments of the   ratios of molecular nitrogen to hydrogen.

Any steel will nitride, simply because of the presence of iron. However they will not produce the same hardness values because of the steel chemistry’s. The iron will assist in the surface corrosion resistance by the formation of Iron Nitrides.

Below is a general group of steels that will nitride. The list is by no means complete:

A general note for accomplishing a good and sound nitrided structure. 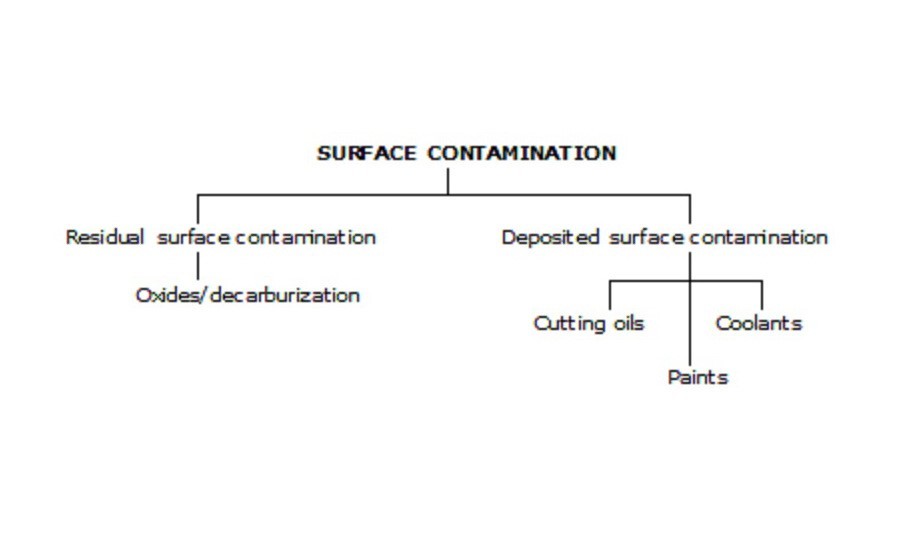