SIFCO Forge Fire. SIFCO provides forgings to the Energy and Aerospace Industries from locations in Cleveland, Ohio, USA, Italy and Orange, California. Back on December 26th the Orange facility suffered a bad fire as you can see from this press release from the company;  “We experienced a fire at SIFCO’s Orange, California manufacturing facility (“Orange”) on December 26.  The damage is significant to one of three manufacturing buildings.  As noted in more detail below, we have taken steps to address such damage and minimize disruption.  We are thankful that no one was injured in this event.  The two buildings not directly impacted were back in service on December 28.  We have been actively working containment and return to service of the facility.”

Destroyed in the fire were 6 mesh belt annealing lines. Originally the company was looking to replace these furnaces with used items however our understanding is that SIFCO was only able to find 1 used line that fit the bill and as we speak the others are being replaced with new furnaces.  Wisconsin Oven Corporation announced the shipment of one (1) Electrically Heated Horizontal Solution Treat System with a chiller system to a manufacturer in the aerospace industry. The Horizontal Solution Treat System has a maximum oven operating temperature of 1,100°F and work zone dimensions of 12’3″ wide x 3’11″ long x 4’6″ high. Guaranteed temperature uniformity of ±10°F at set points of 870°F, 920°F, & 985°F was documented with a twelve (12) point profile test in an empty oven chamber under static operating conditions and was performed in accordance with BAC 5621F specifications. 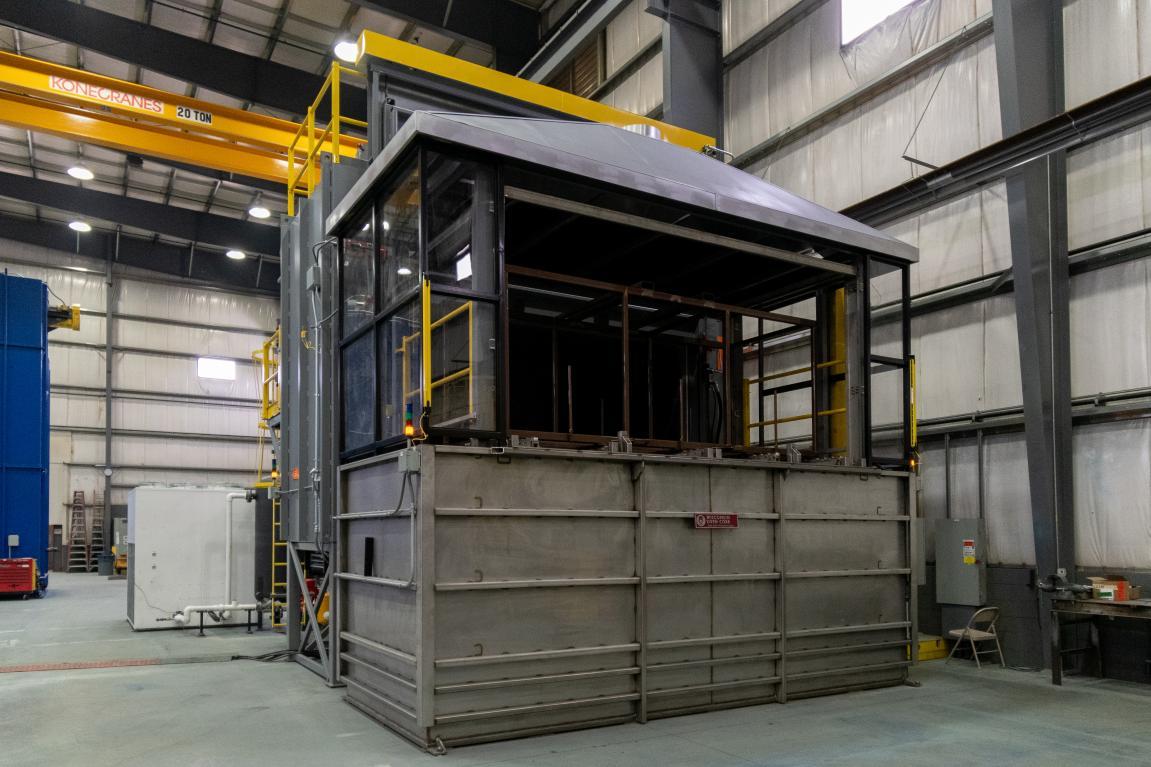 Furnace and oven builder Pyradia sent us this press release about a new order they received from a company by the name of Unicast in New Hampshire, USA.  The company is based just outside of Montreal, Canada and we have seen it grow by leaps and bounds over the past 20 years. We expect to be visiting the operation in just a few weeks and will give you some more details then; “Uni-Cast is expanding their factory located in Londonderry, NH and they chose Pyradia for the purchase of 2 electric drop bottom ovens with a temperature uniformity of +/- 10 °F. Uni-Cast is a major manufacturer of sophisticated aluminum investment castings which has built an enviable reputation in the industry for strict quality control and the capability to produce some of the industry’s most challenging designs.”

Cambridge Heat Treat, Canada. We ran across a press release in a Thermal Processing magazine late last week which talked about commercial heat treater Cambridge Heat Treat adding some equipment. The item left us rather puzzled as this news item is now almost a year old. Our friends at family owned Cambridge did indeed place an order last year for two brand new, top of the line batch IQ furnaces with working dimensions of 36” X 48” X 36”. At the same time the company purchased two used units with exactly the same dimensions and these were installed last year. What we can tell you which is “new” is that Cambridge has just placed an order with controls company SSI to update the controls on the used furnaces. This photo shows you the entire line. 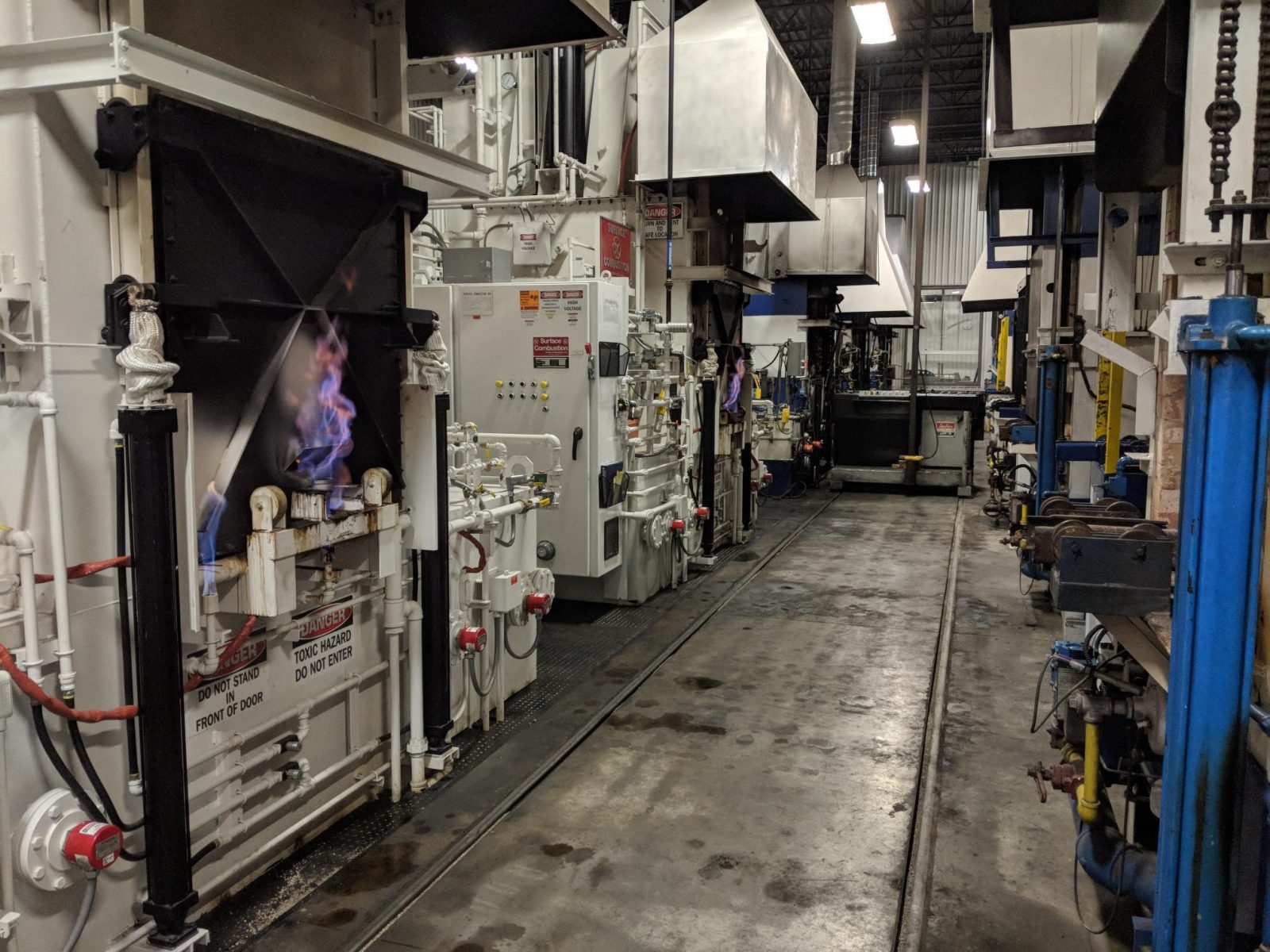 Are the Chinese taking over? We have had several stories recently about how a Chinese auto parts company has purchased a European builder of vacuum furnaces (scroll through our news for the past couple of weeks to find all the details). There is only one small catch to this story-the vacuum furnace manufacturer is saying that this is not the case leaving us very puzzled. There appears to be confirmation on Chinese websites but until we have 100% confirmation by both parties we are going to give this story a rest. In Mexico we recently mentioned how Paulo had just bought a really, really nice vacuum furnace for their facility in Monterrey. Well according to the company it was commissioned just last week and is ready to go. This is the furnace.

French furnace builder BMI is telling the world about another vacuum furnace installation they have in Taiwan meaning that the company has now sold 145 into the country-quite something. “In December 2018, BMI shipped a complete heat treatment line to Taiwan. The production line included three vacuum furnaces: one double chamber gas quenching/oil quenching furnace, one tempering and low pressure nitriding furnace and one gas quenching furnace as well as the peripherals and loaders. This production line was recently installed in a brand new heat treatment workshop. Today, the total number of BMI furnaces in use at Taiwanese customers has reached 145 units.”

In people news we see that Heather Falcone is now CEO of Thermal Vac in Orange, California, USA. Thermal-Vac is a really impressive commercial heat treater started by our friend Steve Driscol many years ago. Heather we have never met but we understand she has been with the company for 16 years in a number of different positions. And in the UK, Mike Oldham has just become Vacuum Technical Manager at one of the leading providers of heat treating equipment in the country, Vacuum & Atmosphere Services Ltd. Mike come with a wealth of experience having worked with companies such as Bodycote and Abar Ipsen.