Recently John Hansen, a legend in the heat treating industry in Michigan passed away. We now have these details about his celebration of life.

“Milford – John Douglas Hansen, 77, of Milford, Michigan, passed away peacefully on February 16, 2021 in Naples, Florida after a lengthy battle with prostate cancer. He is survived by his loving wife of 23 years, Carol; his children, Victoria (Klayton) Dillon of Novi, Michigan and Dennis Hansen of Fenton, Michigan, both with former spouse Judith Hansen; Christopher (Lia) Rooks of Sherwood, Wisconsin; Diane Rooks of Fort Wayne, Indiana and Nicole (David) Murphy of Fort Wayne, Indiana. John adored his eight grandchildren: David Dillon and Kendall Dillon; Samantha Rooks and Nicholas Rooks; Kelsie Rooks and Joshua Armstrong; Jacob Borland and Madison Murphy and three great-grandchildren Maxlynn, James and Xavier. He is also survived by his brother William Michael Hansen of Spring Lake, Michigan and many nieces and nephews. He was preceded in death by his parents William Charles and Marion Ruth Hansen.

John or “Doug” as many knew him, was born at Scott Air Force Base near Belleville, Illinois to William and Marion Hansen. He grew up in Grand Rapids, Michigan, graduating from Union High School in 1961, then went on to Northern Michigan University where he studied Industrial Technology. After graduating, he began a long career in sales and went on to start his own business that would serve as a driving force in his life for many years. He loved the relationships his work brought to his life and was frequently known to drive hundreds of miles for a personal conversation and handshake with a customer when a simple phone call would do.

John had a lifelong love of automobiles and car racing, starting with go-cart and sprint car racing as a teen. He spent years traveling with friends and family to various raceways and particularly relished his season passes and race weekends each year at Michigan Speedway. He also enjoyed working on his own classic cars as a hobby and could always be found polishing chrome or putting a coat of wax on something somewhere. He also had a passion for boating, keeping boats on northern Michigan lakes and Lake St. Clair over the years and treasured his family’s annual summer getaways on Lake Michigan, where even the youngest grandchildren could not keep up with his antics. More recently, he developed a love of travel by motorcoach and enjoyed planning trips and traveling together with friends, frequently pushing the legal length limits on U.S. Interstates. He and Carol enjoyed spending the winter months in Naples, Florida in recent years with their cherished feline, Gabby.

A memorial mass to celebrate John’s life will take place at 10:30 am Saturday, May 22 at St. James Catholic Church, 46325 W. Ten Mile Rd., Novi MI. Visitation will begin at 9:30 am. Tributes may be shared and obituary viewed online at Legacy.com In lieu of flowers, for those who wish, memorial contributions may be made to Adopt-a-Pet of Fenton.” 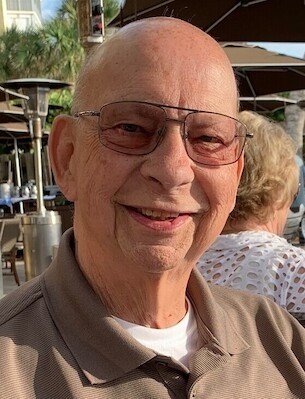