Is Vacuum Carburizing with Oil Quenching a Growing Trend in the Heat Treatment Industry?

Last week we had an article entitled “Vacuum Carburizing with Oil Quenching a Growing Trend in the Heat Treatment Industry”, which generated a great deal of attention because of a change in direction by several of the furnace builders themselves-lets start off with some brief background.

While many in the industry tend to think of vacuum carburizing as a new technology nothing could be further from the truth. Vacuum Carburizing or Low Pressure Carburizing dates back well over half a century and one of the first furnace manufacturers to really promote the technology was the CI Hayes Company of the US who at one point was turning out a system every two weeks (Consultants David Pye and Dan Herring have both written excellent articles about the history of vacuum carburizing).

The original systems by CI Hayes were typically (perhaps always) based upon oil quenching, however as other companies such as ECM of France started marketing vacuum carburizing systems it gradually became the norm to see vacuum carburizers using nitrogen or occasionally helium as the quenching medium. Over the past 30 years the technology has become very commonplace in certain industries-automotive transmission components would be the most obvious example. While the benefits of vacuum carburizing are well known other factors have prevented it from becoming more mainstream, chiefly price and compatibility.

At least two companies, ECM and SECO/WARWICK recently set out to address these issues and the end result is that both now has an offering which will fit into an existing Batch IQ (Sealed Quench) line. Since Batch IQ furnaces are the most common style of furnace in the world it makes complete sense to build a vacuum oil quench with the same working dimensions as a standard atmosphere furnace, typically 36” X 48” X 36”. At the same time the new systems are designed to fit with existing charge cars, washers and tempers. (We want to point out that Ipsen, the largest vacuum furnace builder in the world also has such a system. Unfortunately as of press time we had not had a chance to get comments from Ipsen).

With these new offerings the “compatibility” issue has been resolved and this has eliminated the need for new investments in charge cars, washers and tempers. Price will still be an issue as the new systems are still more expensive than a standard batch IQ, however the difference is smaller than it once was. Below we have comments from SECO/WARWICK and ECM about their new product offerings. We will watch with bated breath to see if we are witnessing a new, growing trend in the industry.

“For about a decade, Gord, SW has offered a Vacuum Carburizing line and still does today.  It is a top seller for our company.  A couple years ago we decided that our aerospace offering of a vacuum oil quench is too expensive for replacing standard gas carburizing.  For this reason we developed a new furnace line that is price competitive with standard IQ furnaces both on purchase price and operating costs.  This “Super IQ” furnace offers all the benefits of our vacuum oil quench, but does so with standard, non-vacuum oil quenching and allows for heavy and dense loading in the heating chamber for Low Pressure Carburizing.  So we matched the pricing, performance and loaders of the typical IQ furnace, but we have much better quality carburizing and through-hardening.  The final feature that sets us apart is our LPC Simulation software which is a must in order to properly carburizing various load configurations.  Our software allows one to quickly model the part and surface area, add in the material grade and how many pieces are in the load, and a recipe is given for the desired case depth.  What is neat here is that temperatures can be varied to show how 100F higher temperature can cut carburizing times in half!”. Mark Hemsath, SECO/WARWICK” 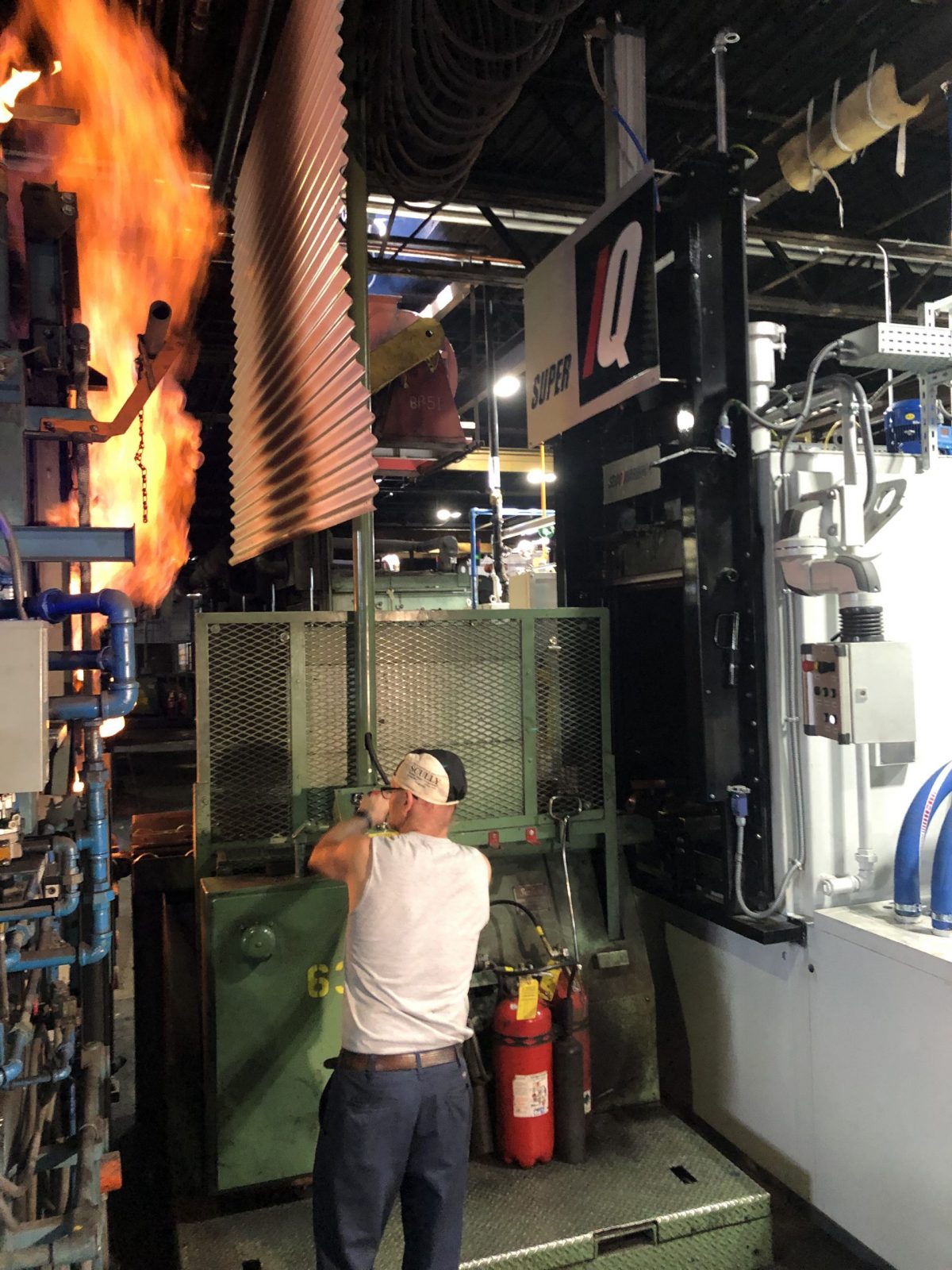 “ECM’s new ECO line brings the technology that is leading the world today with safety and efficiency for carburizing to the new and existing IQ (sealed quench) lines in heat treating. As the world leaders in Low Pressure Carburizing ( LPC) for over 30 years and with hundreds of heating cells on hundreds of installations, we have taken this experience and technology and placed it in 3 sizes of furnaces with the largest a 36”x 48” format with oil quenching.  This system will modernize all IQ installed lines by replacing an existing aged furnace, with the capability of processing parts with precise carburizing in less time with the safety of vacuum processing. The system allows for Low Pressure Carburizing, Low Pressure Carbonitriding (LPCN), brazing, vacuum hardening and other vacuum processes. This furnace will interface with existing loaders, tempers, and washers on installed systems or can be installed with new equipment supplied completely by ECM. With the focus in the world on the environment, ECM wants to extend the technology that reduces emissions and provides a safer work environment for users through the ECO line. This technology also allows for furnaces to be idle without utility usage, no flame curtains, no risk of danger or need of supervision. ECM has provided this process solution to most of the worlds’ largest carburizing operations in all markets all over the world and now it can be provided in larger IQ lines. Dennis Beauchesne, ECM.” 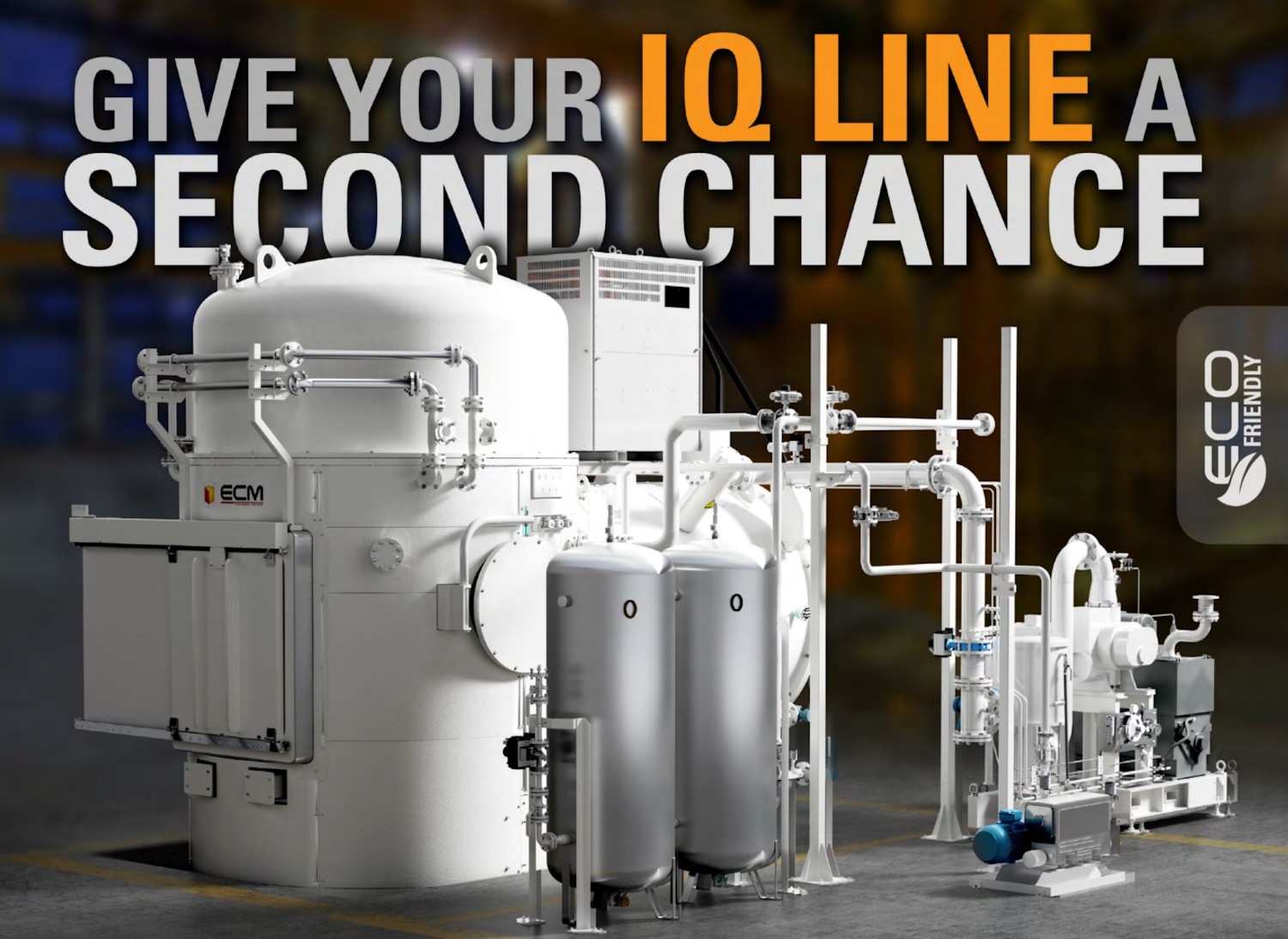