Surface hardening of steel components and tools by nitriding allows for the formation of a very hard layer needed for enhancing their tribological, as well as corrosive, properties without affecting dimensional stability of the products [1-3].  This is especially important and beneficial when the expensive parts- such as long shafts or screws- are treated. Available processes for those parts are gas and ion/plasma nitriding. Equipment operated by Advanced Heat Treat Corp. allow for treating the longest parts in the country- including long shafts and extruder screws reaching almost 400” in length, see Fig. 1. 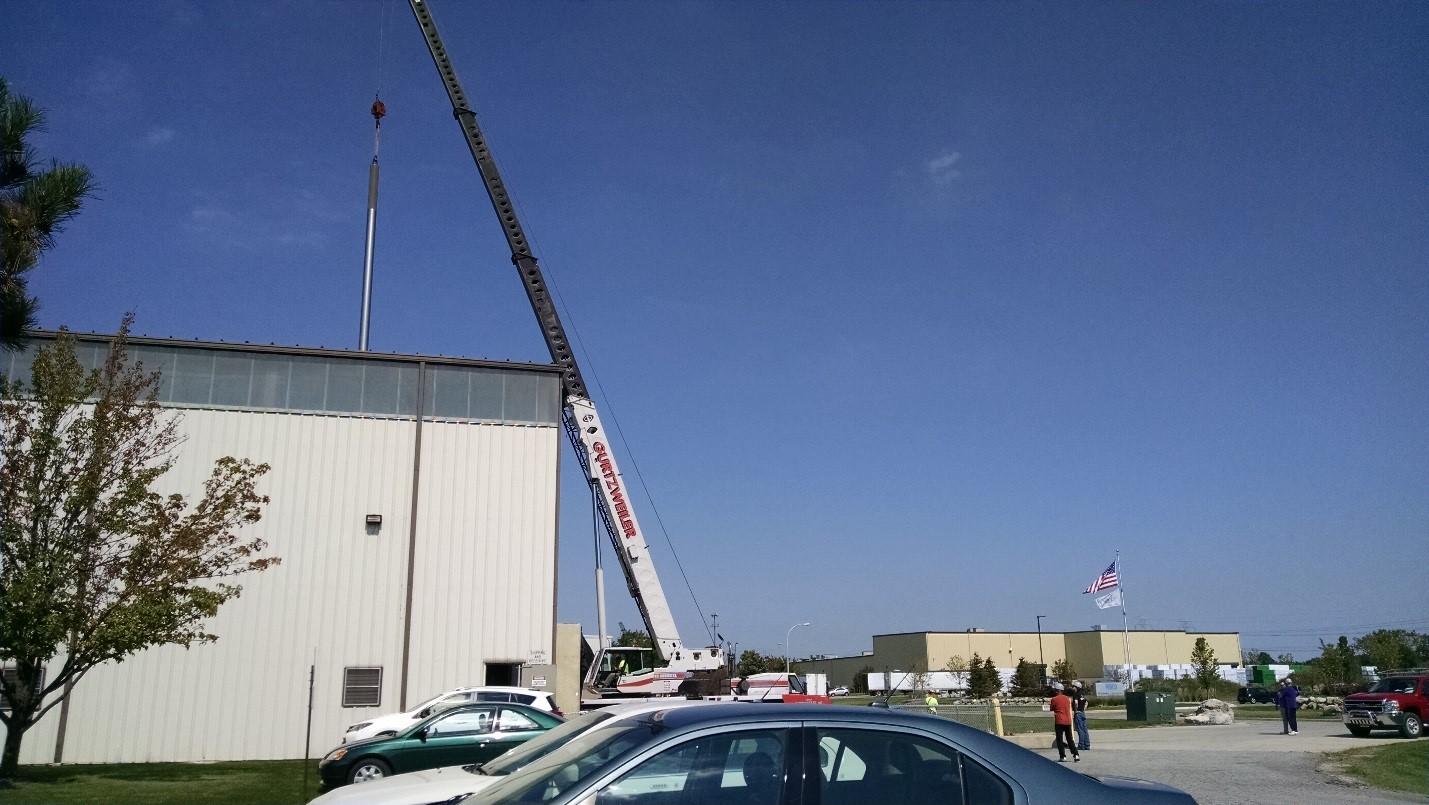 Fig. 1. Unloading of 35’-long shaft from plasma vessel through the open roof of the AHT’s building in Monroe, Michigan.

Heating And Nitriding By The Glow Discharge/Plasma Processing

A pulse, abnormal glow discharge generated between the cathode/part and the anode/wall of the vacuum vessel generates high energy ions of nitrogen and hydrogen gases doped occasionally with a small amount of methane and argon. These active species have a positive charge and, together with the high energy neutrals, bombard the surface of the treated part. They generate active nitrogen atoms and NxHy radicals and raise its temperature via transfer of their kinetic energy to the cathode. In plasma nitriding, exactly the same energy per surface area is generated along the entire length of the long parts. The plasma density is in the range of 0.4-0.8 W/cm2 and this is enough for heating the entire part to the desired temperature [1, 4]. Only the treated part is heated and not the “entire” vacuum chamber. Thus, energy required for heating depends only on the size and quantity of the parts.

Alternatively; in the gas nitriding furnace, its entire length is heated by multiple heat zones/segments regardless of the quantity and the length of the treated components. This can be relatively costly when trying to maintain uniformity of heating for the long parts and low quantity. In addition, ammonia gas circulation must be very uniform from the top to the bottom of the part’s surface to assure the same activity of the atmosphere.

In plasma nitriding, only a small fraction of the gas flow compared to the gas flow in gas nitriding is used (approximate ratio 1:10). Composition of the gas ionized/activated near the top of the load is the same as at the bottom since the glow discharge is characterized by the so called “Crookes Dark Space” (CDS) near the cathode. Thickness of the CDS depends only on the gas pressure, gas composition, and temperature used; and those are the same along the entire length of the part/cathode. 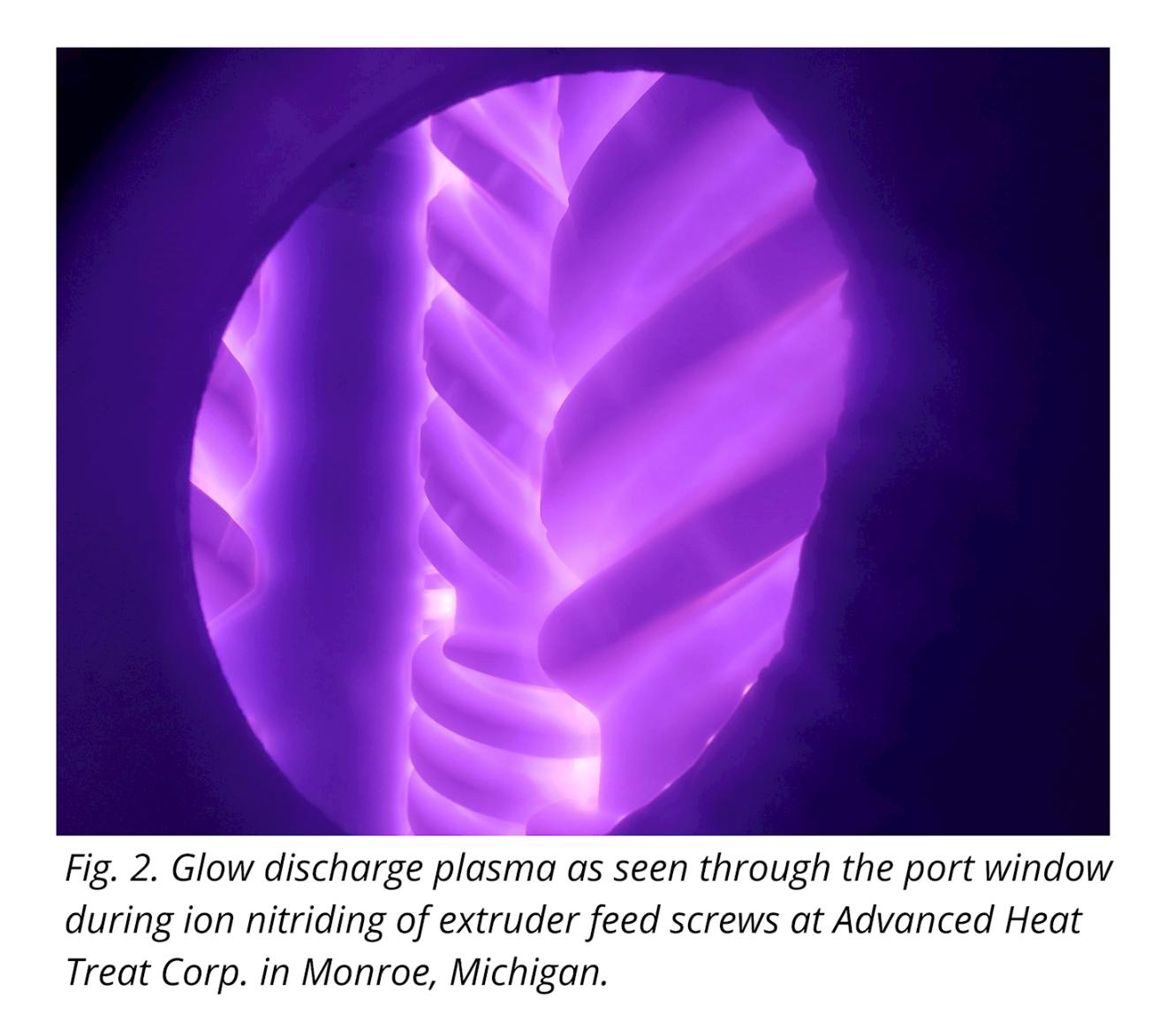 Products made of all types of steels and ferrous alloys can be treated in plasma process without any additional activation/pre-activation needed. Whereas, pre-activation steps are necessary in gas nitriding process when treating stainless steels. This is possible because the high-energy species bombarding the cathode cause its sputtering leading to elimination of the native chromium oxides present on surface of the stainless steels [1]. This sputtering phenomenon is present during the entire process/contact of the glow discharge with the part. Presence of sputtering also limits growth of the compound zone, which can be very beneficial for the quality of the nitrided layer. Total case depth kinetics are parabolic in relationship with nitriding time and exponential in relationship with temperature. See example for stainless steel case depth modeling in Fig. 3. 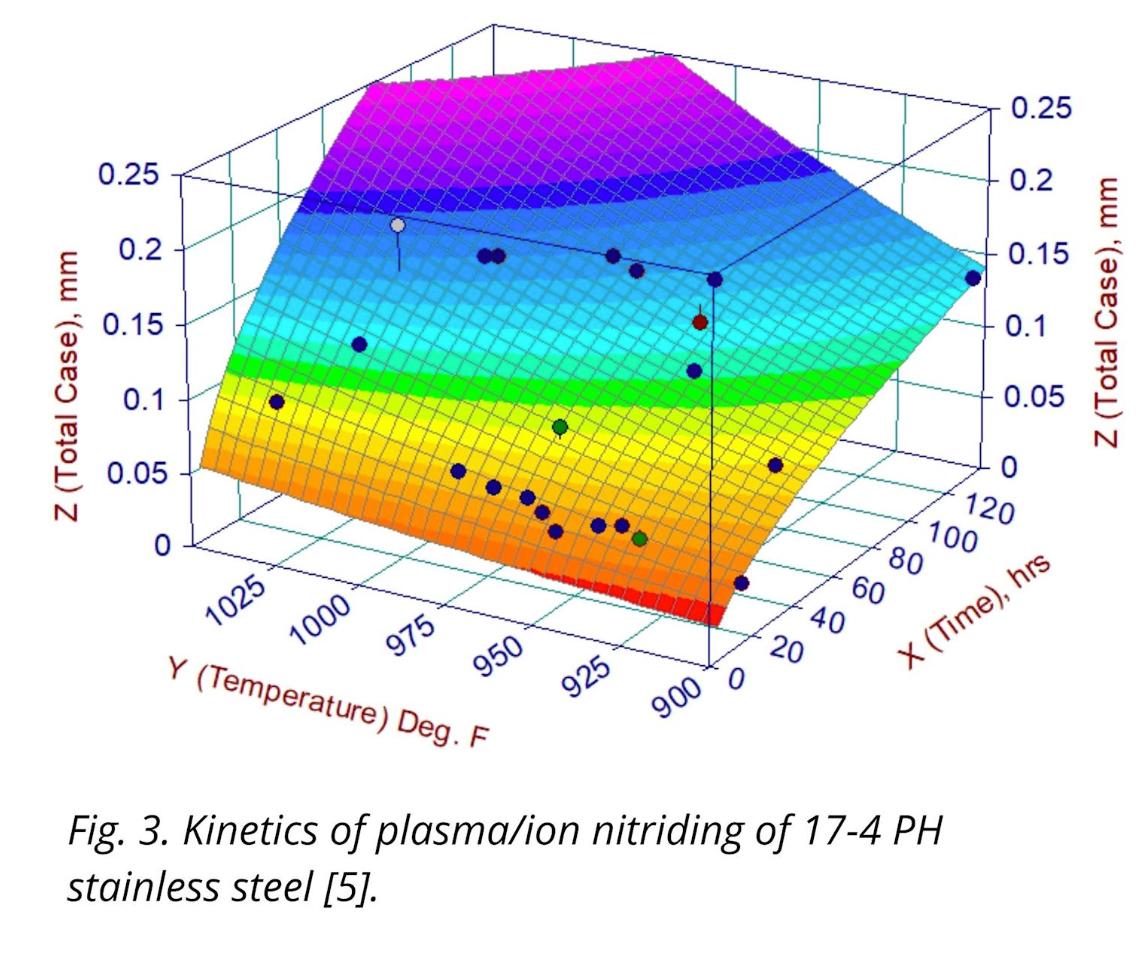 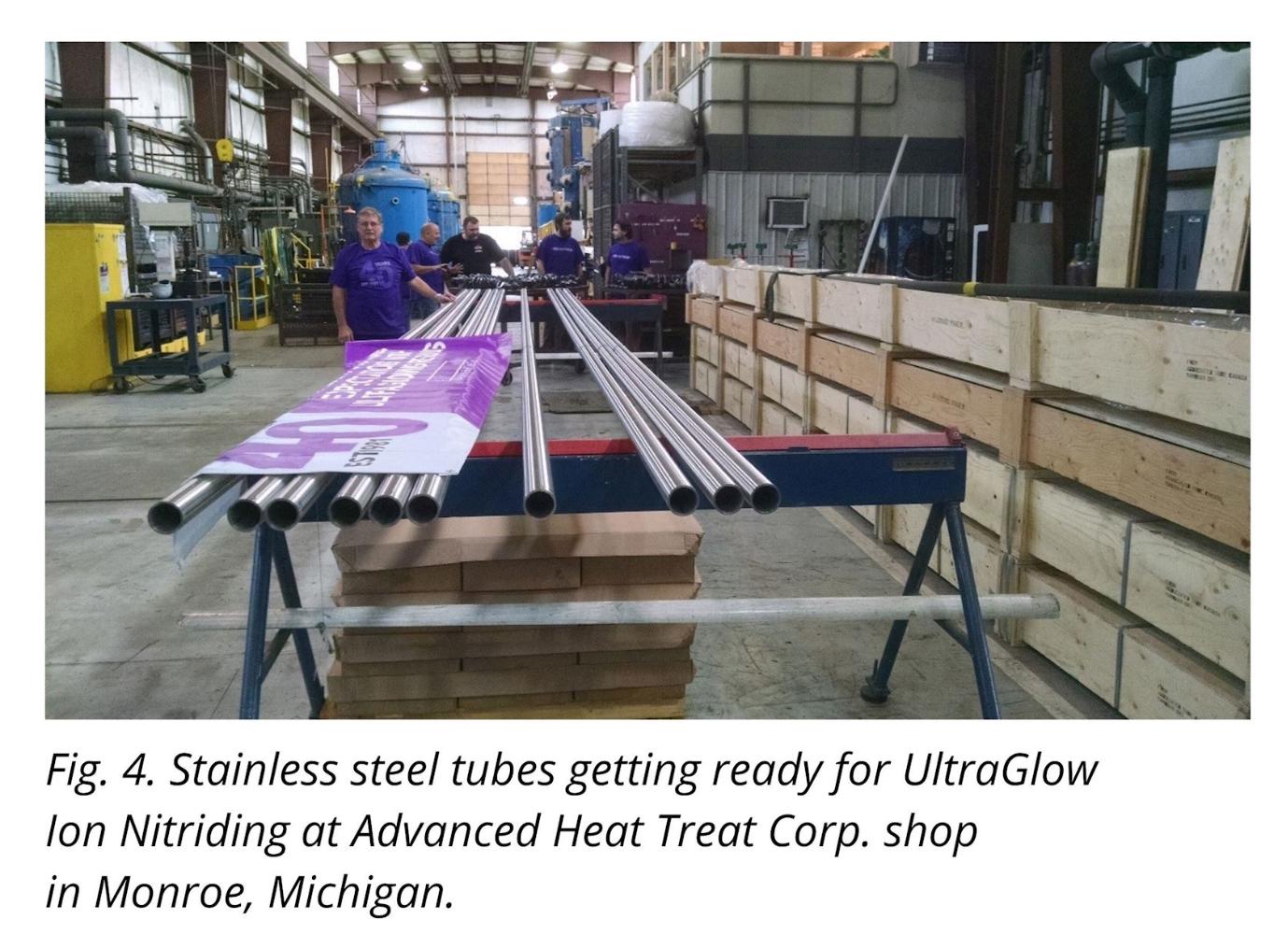 The color of all treated parts is typically grey-silver and this depends on the length of the process and resulting total case depth [6]. After long processing, a grey color prevails since the layers formed are quite deep, Fig. 5.

It should also be added that the length of the ion nitriding vessel can be adjusted as needed by using proper modules of the vessel. 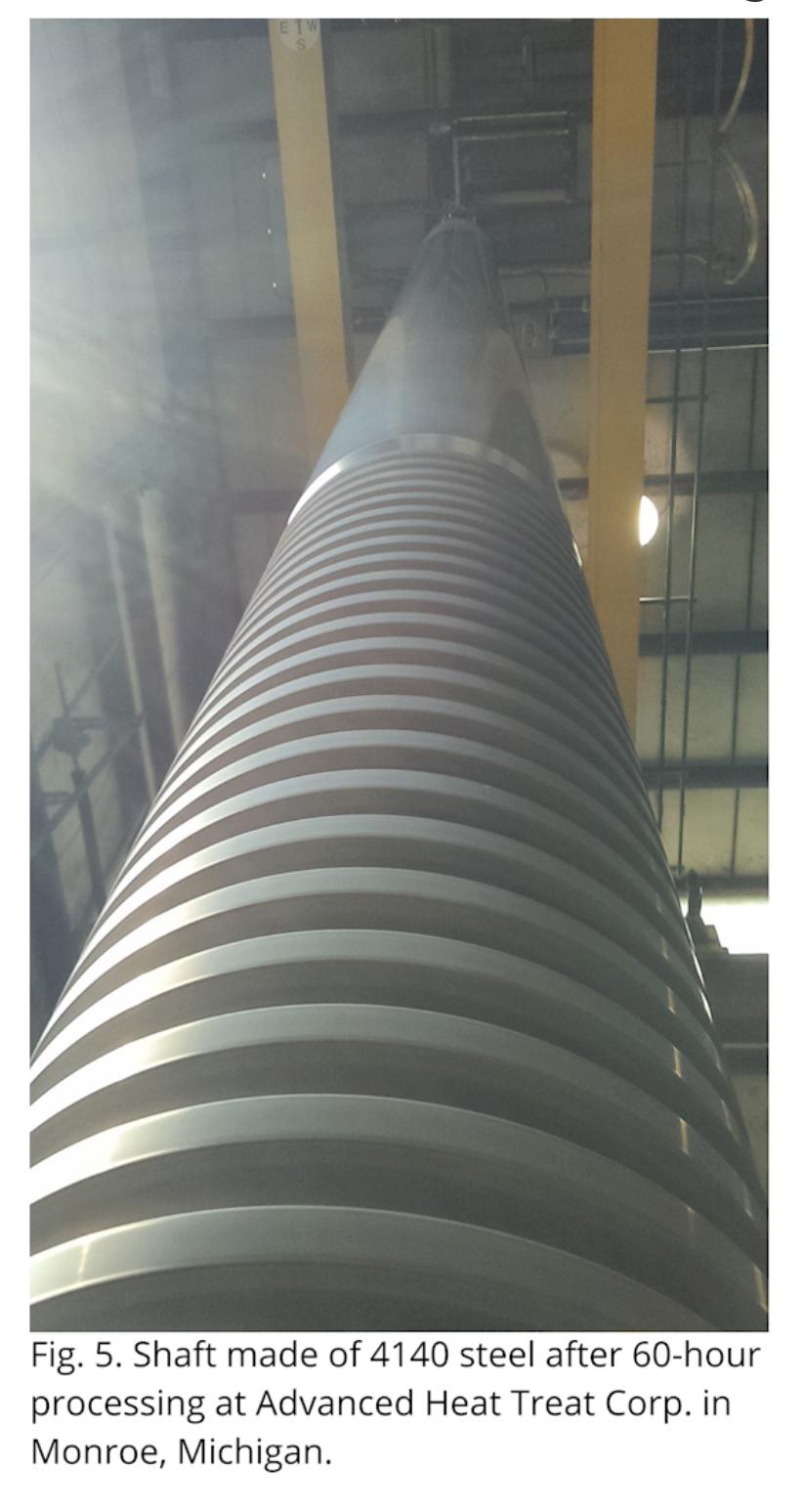