How Are We Doing These Days-IHEA Economic Update

The Industrial Heating Equipment Association (IHEA) provides on a monthly basis a very well thought out summary of the state of manufacturing in the US. As heat treating follows manufacturing these summaries can provide good insight into the future of our industry. The entire report can be found at IHEA Executive Economic Update Analysis – 2111.pdf

“December 2021; Over the last two years of economic crisis manufacturing has, to some extent, avoided the worst of it. This has not been the case for all manufacturers as there have been sectors that have been slammed hard by the recession in 2020 and the myriad of problems triggered by high growth recovery in 2021 but there have been trends that provided an unexpected benefit to other sectors. As we proceed into 2022 this pattern is likely to continue with more opportunity for gain in a wider variety of manufacturing segments.

Reason for optimism number one is the continued interest in reshoring and onshoring. The prime motivation for companies seeking to bring production back to the US has been the breakdown of the supply chain in 2021. It has become apparent that this is not a temporary phenomenon. The impact of the pandemic will last for years, geopolitical tensions are ratcheting up and the production cost advantages enjoyed by overseas markets have faded. More companies than ever have been seeking domestic producers.

Reason for optimism number two is the continued expansion of technology. The labor shortage in the US is not going away and the only realistic response is for manufacturers to turn more aggressively towards robotics and automation to do these jobs. The good news is that the technological gains have been impressive and the costs have become more manageable. The advance in technological expertise has allowed the US to regain a competitive edge.

Reason for optimism number three is the potential for global recovery. Exports account for over 15% of the total US GDP and that is about $2.1 trillion. Of that total, manufacturing accounts for over 83% of all goods exported. It is a huge part of the economy and if the rest of the world has started to see recovery that means that demand for these exports will rise accordingly. The vast majority of US manufacturing exports go to ten trade partners and all ten have been showing some definite signs of economic rebound.

Reason for pessimism number one is continued inflationary pressure. In general, manufacturers get hit harder by inflation than recession. The fact is that most manufacturers are selling into larger companies and assembly operations. Fully 75% of US manufacturers have less than 25 employees and are classified as small to medium sized businesses. They get hit by higher priced commodities and intermediate parts, higher logistics costs and higher labor costs and rarely have the opportunity to pass these hikes on to their customers. There is only so much of this inflationary environment they can handle. At this point the assertion is that inflation will start to recede by the second quarter but it will still remain higher than it was even in 2019. If wage inflation takes off and starts a wage-price spiral, the threat becomes even more pronounced.

Reason for pessimism number two is consumer retreat. The consumer was able to muddle through the recession in 2020 with a great deal of government help. The US spent the equivalent of the Japanese GDP ($5 trillion) on stimulus of some kind or the other. That allowed the consumer to keep spending and resulted in a massive increase in savings. At one point the global economy had over $7 trillion in excess savings and that was the cash that drove all the spending in 2021. The savings overhang is now depleted and there is no more such assistance in the cards. There is no more coming from Congress and the Federal Reserve has switched gears and is now oriented towards fighting inflation with reduced bond buying and higher interest rates. This means that consumers are basically on their own this time. If there is a downturn, they can’t expect a lot of help and that could mean a sharp reduction in their willingness to consume – services or goods. The latest outbreak of the virus has pushed consumers back to a more cautious position – not as drastic as that which took place in 2020 but restrained, nonetheless. The optimistic outlook holds that the omicron variant starts to fade by Q2 and consumers respond with another round of spending, but there are also those that assert the consumer will stay in semi-isolation for much longer. Beyond that, there is no reason that yet another variant will emerge as we are all familiar with how fast that can develop.

New Automobile & Light Truck Sales The automotive sector continues to be the barometer for the economy as a whole. The drastic slump in sales that has marked the last year or so has been almost entirely due to supply chain issues rather than any real slide in consumer demand. There are some very interesting developments on the horizon. The supply chain issue has slowly improved although it remains a major inhibition. Six months ago, the carmakers were missing dozens of critical parts and assemblies, today that number has fallen drastically to just a few critical parts. The chip shortage has been easing and there has been an opportunity to catch up on some of the production but full operation at all factories and for all models is still seen as some months away. Meanwhile the demand for new vehicles has continued to build and car dealers assert they could sell their inventory in a matter of weeks if they could get it. The threat that most worries the sector now is inflation. Not only does this make the vehicles more expensive but if interest rates climb as expected the car loan will become more costly as well. The worst-case scenario would be a situation where inventories finally swell but vehicles cost more and loans become more expensive. It would be the opposite of what is happening now – high levels of inventory and lower demand 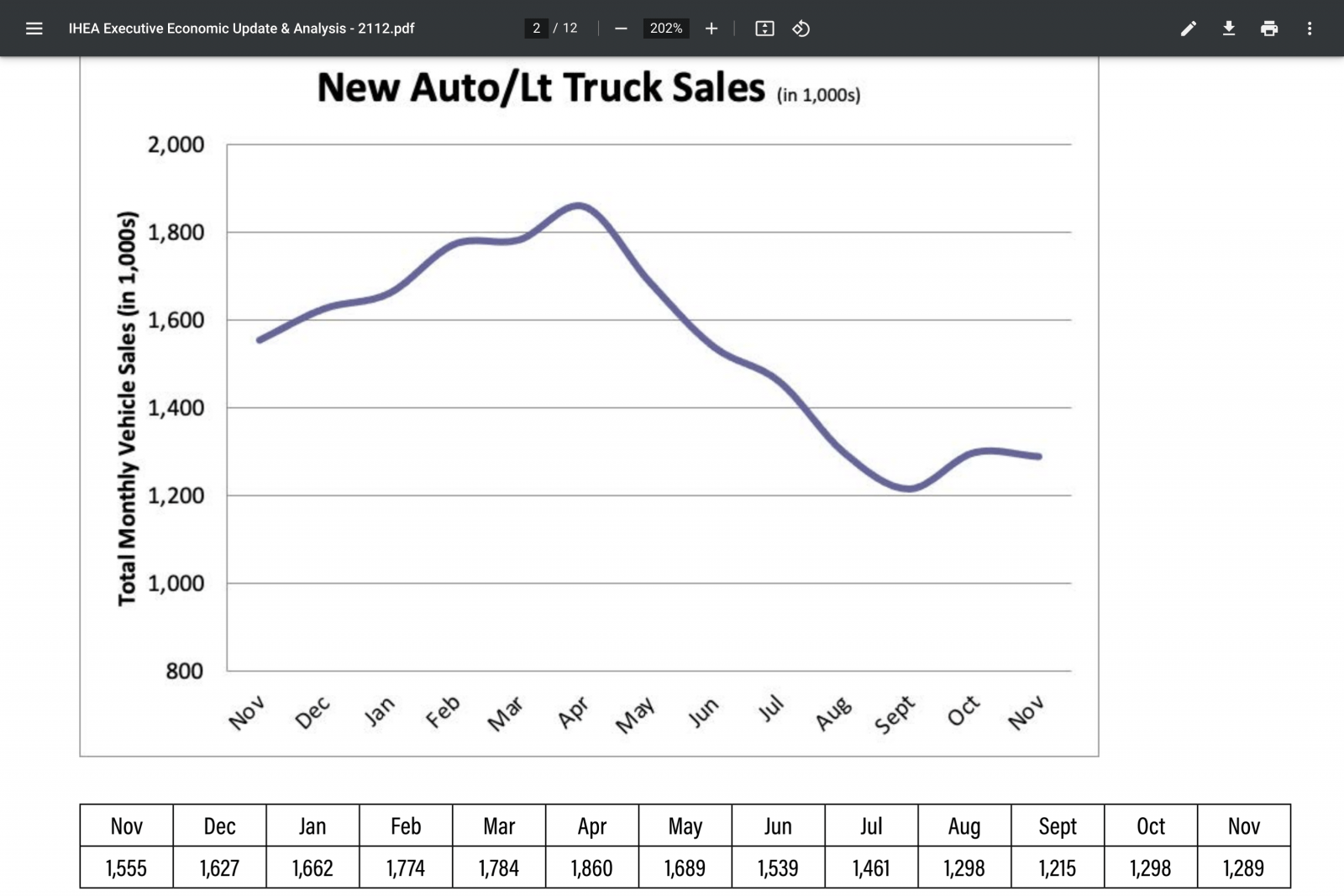