Last week we posted a news item about Hot Isostatic Pressing equipment and North American suppliers. As it turns out “The Monty Heat Treat News” was slightly off the mark on this and several readers corrected us. As it turns out the only North American based supplier of new “HIP” equipment that we have become aware of is a company by the name of “Pressure Technology Inc.” which was founded in 1977 by Arnold Bowles in Huntingdon Valley, Pennsylvania, USA.
PTI designs and builds new systems but in addition is one of a very, small select group of companies which offers commercial “HIP” Processing (this group would include but is not limited to, Stack Metallurgical, Paulo, Lake City HT, Kittyhawk and the largest of all Bodycote who dominates the market).  PTI has locations in Warminster, PA, Concord, Ohio and a new location in Alachua, Florida which opened just a few months ago.
It is rather interesting that the facility in Concord, Ohio was originally largely dedicated to processing parts for Precison Castparts Corp., (PCC) when it was built however when Paulo Products installed a brand new HIP system just a few years ago our guess would be that PTI ran up against some strong competition. Especially in light of the fact that some of the vacuum hardening capacity at Paulo, Willoughby, Ohio was for PCC.  For all the details on PTI we would suggest https://www.pressuretechnology.com/ 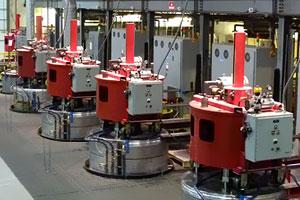