Induction heating giant Ajax TOCCO Magnethermic (whose banner ad can be found on the right side of this page) faces a similar dilemma to many manufacturers in North America-where to find good people? As you can see in this note the company is looking for people to fill a number of good, well paying positions and yet they still are having a hard time filling these positions;

“Ajax TOCCO Magnethermic has worldwide operations in nine countries. It designs and makes industrial heating and melting equipment. Ajax TOCCO is looking for skilled labor at its manufacturing headquarters in Warren. “What I mean by that is welders, machinists, assembly workers, those people that can read a drawing and understand what’s required to assemble or make the pieces and parts necessary for the equipment we supply to our customers,” said Tom Illencik, president of Ajax TOCCO. The company’s customers are steel mills, foundries and forge shops, among others. It makes things like heat treat scanners, conveyor rolls and power inverters from scratch.

“We’ve got a wide variety of stuff going here. We never make the same thing twice. The person has to be fairly dynamic and adapt to change,” Illencik said. Ajax TOCCO has been around since the early 1900s. Sherman Tanks used to be made in the factory during World War II before Ajax TOCCO moved in. Today, it continues to raise the bar while maintaining a commitment to quality, service and delivery. It’s proud that two people in the plant will celebrate their 40th anniversary with the company next week. “There’s no end to a person’s capability to advance in this company,” Illencik said. “I started out as an engineer and continued to move up in the process, and I’ve been here 35 years myself.” 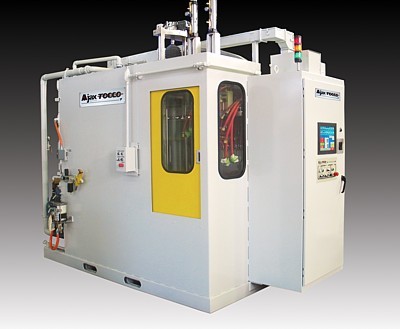