From Jack Cahn, founder and owner of Deep Cryogenics International we have this technical paper about nitriding combined with Deep Cryogenics. To learn more about the story behind Deep Cryogenics we would suggest reading a very interesting interview we did with Jack earlier this year https://themonty.com/project/jack-cahn-deep-cryogenic-international/

Introduction. Steels are nitrided in the machinery and toolmaking industries to obtain better tribological properties and fatigue performance, which result from compressive stresses generated in the surface [1, 2, 3]. Typical nitrided products include a variety of cutting tools, drills, dies, injection moulds, valves and many machine parts, such as gears, crankshafts and spring [4]. In nitriding, nitrogen is introduced into the surface of steel over a period of several tens of hours. Gas nitriding is the most common process but nitriding in molten salt baths and plasma nitriding is used as well [5, 6].

Typical nitriding temperatures are between 500 and 530°C, depending on the tempering temperature and associated precipitation processes. The tempering temperature must be higher than the nitriding temperature. In conventional thermochemical treatment (TCT), nitriding is always the final operation. In most cases, the enrichment takes between 15 and 30 hours, depending on the material, the desired case depth and the nitriding process type. Nitriding as a means of increasing surface hardness is a costly operation, mainly due to long process times. Nevertheless, it is still widely used and difficult to replace with other TCT processes.

Nitriding can by accelerated by using a higher nitriding temperature. The result will be a nitrided layer of a greater thickness produced in a shorter time than with conventional nitriding [7]. However, nitriding at increased temperatures cannot be used as the last operation in a thermochemical treatment sequence. Therefore, it is applied as the first operation and followed by quenching and tempering. Much like conventional nitriding, it delivers high surface hardness and a very good toughness in the core can be expected to lead to a lower case hardness due to subsequent austenitizing and tempering, and to a lower volume fraction of nitrides and carbonitrides.

For this reason, attention should be paid to subsequent hardening of the nitrided layer, the base material as well as the core of the nitrided part. Sub-surface hardness can be increased by holding the part near the austenitizing temperature and by rapid cooling, which produces martensite in the primary nitrided layer, and by subsequent age hardening. Nitrogen migration during austenitizing causes (Fe, M)-C-N particles to form in the sub-surface nitrided layer. These possess a structure which differs from that of the original nitrided layer (depending on chemical and phase composition). An appropriate austenitizing temperature and cooling rate lead to higher core hardness even without the presence of nitrogen. Several procedures are available for steel hardening. Their detailed descriptions are given in [8–11].

Deep cryogenic  treatment (DCT) is an advanced process for increasing the hardness in the sub￾surface layer. DCT is usually performed right after quenching, i.e. before tempering. In this case, deep cryogenic treatment promotes grain refinement and precipitation of fine carbonitrides that contain the alloying elements. Generally, the purpose of DCT is to reduce the amount of retained austenite, to improve the matrix hardness (or surface hardness in thermochemical treatment), to stabilise martensite for dimensional and geometric stability of the part and, last but not least, to improve wear resistance [12–16]. The impact of deep cryogenic treatment on the Czech Standard 41 9830 steel grade (whose equivalents are designated as DIN 1.3433 / HS6-5-2, AISI M2 and others) was reported in numerous studies [17–20]. All of them also indicated added value in terms of higher wear resistance and longer life of tools.

Material and treatment. Square bars of 7×7 mm cross section were produced of the Czech Standard 41 9830 high-speed steel grade (whose equivalents are designated as DIN 1.3433 / HS 6-5-2 and AISI M2). Its chemical composition is given in Table 1. The bars were thermochemically treated using four sequences. These combined gas nitriding, quenching and tempering and deep cryogenic treatment (DCT). Four sequences were compared in this investigation. Conventional nitriding at a reduced nitriding temperature without and with DCT is identified as sequences A and B, respectively. Sequences with nitriding at an increased temperature without and with DCT are identified as C and D, respectively. The differences consisted in nitriding temperatures and holding times, where the latter were appreciably shorter for the higher temperatures.

Additional differences were in the order of operations. In conventional processes, nitriding is always the last TCT operation. When a higher nitriding temperature is used, nitriding cannot be applied as the last operation (due to the risk of over-tempering the matrix). In this study, nitriding at increased temperatures was the first step in the thermochemical sequence. It was followed by austenitizing, quenching and tempering in a reactive atmosphere (ammonia). After conventional nitriding, tempering was performed in air furnaces with no protective atmosphere. The sequences and their designations are listed in Table 2.

Conventional gas nitriding was performed in ammonia gas in container placed in a pit furnace. The process was controlled by regulating the ammonia flow. The content of dissociated ammonia was monitored using a water-based dissociation meter. Nitriding at increased temperatures was performed in the NX609 Nitrex equipment, in cooperation with IMP Warsaw. The equipment offers automatic controlled gas nitriding with a good process repeatability. Quenching was carried out in vacuum furnaces using identical temperatures, holding times and nitrogen pressure. After both nitriding variants, deep cryogenic treatment was performed in cryogenic boxes which provide good process control and stability. In conventional nitriding sequences, tempering was completed in air furnaces with no protective atmosphere. In sequence with increased nitriding temperatures, an atmosphere containing ammonia was employed. The parameters of nitriding and tempering in a reactive atmosphere are given in Table 1.

Results and discussion. Metallographic sections were prepared by cutting the samples perpendicular to the surface. Samples were embedded into resin by hot pressing, they were ground and polished. Microstructure was revealed by Nital etchant. The thickness of nitrided layers was checked under an optical microscope (Fig. 1). Conventional gas nitriding produced layers of approximately 100 µm thickness. Sequence A led to approx. 110 µm and sequence B a layer of approx. 110 µm. No appreciable effects of deep cryogenic treatment were detected in these specimens. Nitriding at increased temperatures led to greater layer thickness of up to 190 µm. In specimen C, it was approximately 150 µm. Sequence D with deep freezing for 8 hours produced a layer approximately 190 µm. In this case, a considerable impact of deep cryogenic treatment was found. 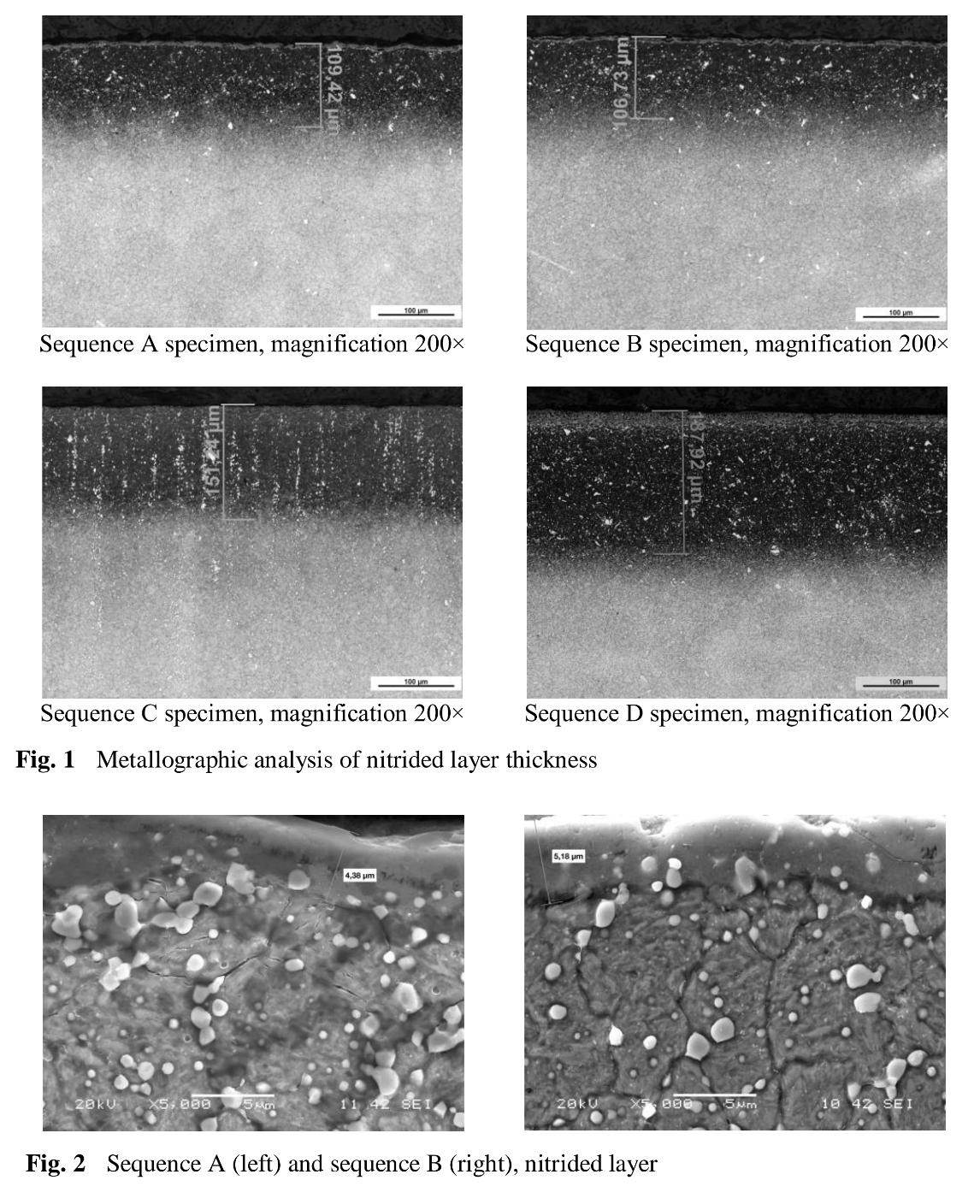 Nitrided layers were examined in detail using a JEOL-6380 scanning electron microscope. In a close-up image, the white compound layer had a thickness between 4 and 5 µm (Fig. 2 – sequences A and B) in the conventionally-nitrided specimens, and approximately 2 µm in the specimens nitrided at increased temperatures for shorter times (Fig. 3 – sequences C and D). Micrographs of compound and diffusion layers are shown in the Fig. 2 and Fig. 3. Structure is composed of tempered martensite and carbides undissolved during austenitization. 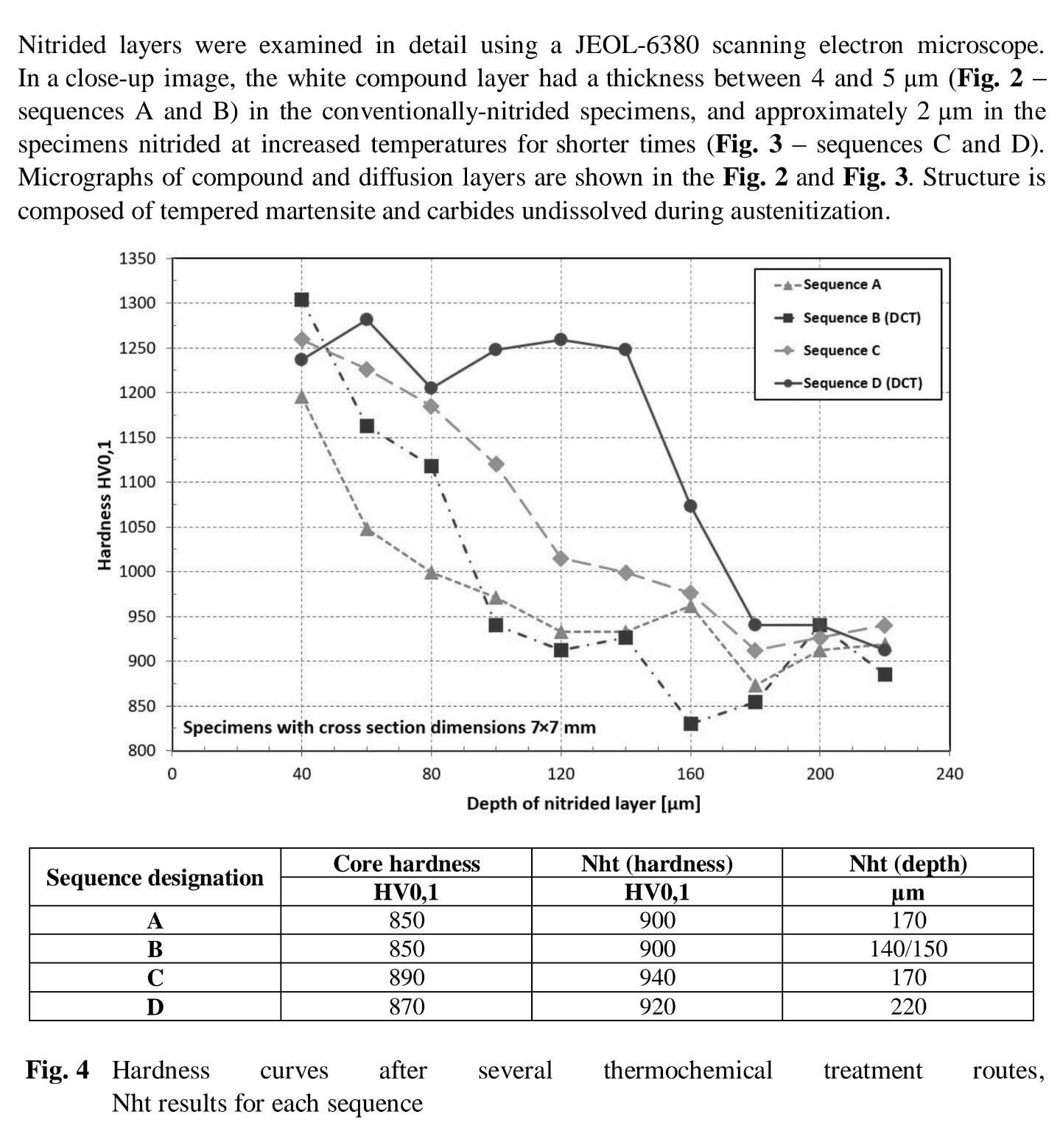 Owing to the combination of an increased nitriding temperature, deep cryogenic treatment (160°C for 8 hours) and tempering in a reactive atmosphere (ammonia) in sequence D, the resulting hardness increased considerably in depths down to 140 µm (Fig. 4). Hardness was very stable and above 1250 HV0.1. Sequence C does not have similar trend in hardness curve as sequence D. The hardness decreases consistently with the distance from the surface. The depth of nitriding hardness is a characteristic value for the thickness of the nitride layer (Nht). It describes the vertical distance from the surface to the point at which the hardness is still 50 HV higher than the core hardness. The greatest Nht case thickness was found in specimen D (approx. 220 µm). In specimen C which had not undergone DCT, the Nht thickness was approx. 170 µm (Fig. 4). Core hardness in the specimens tempered in a reactive atmosphere (up to 890 HV0.1) was slightly higher than in the specimens tempered three times in an air furnace (850 HV0.1).

In conventionally gas-nitrided specimens (A and B), the nitrided layer was relatively thin (Nht, specimen A: approx. 170 µm, specimen B: approx. 140/150 µm). A considerable increase in the resulting hardness was found after the deep cryogenic treatment. At 80 µm below the surface of the DCT-treated specimen, the hardness was approximately 100 HV0.1 higher than in the same depth in the specimen without DCT (Fig. 4).

Conclusion. An innovative nitriding process combined with quenching and tempering and deep cryogenic treatment delivers a major increase in hardness and case thickness. With nitriding at increased temperatures, the entire treatment can be shortened (by least 15 hours) which greatly reduces the cost and harmful gas emissions. Post-quenching deep cryogenic treatment improves sub-surface hardness after both types of nitriding. After conventional nitriding with DCT, the hardness is approx. 100 HV0.1 higher at 80 µm below the surface when compared to a process without DCT. After nitriding at increased temperatures, DCT produces a significant increase in hardness. Sequence D led to a very stable hardness in the subsurface layer down to a depth of 140 µm (approx. 1250 HV0.1). 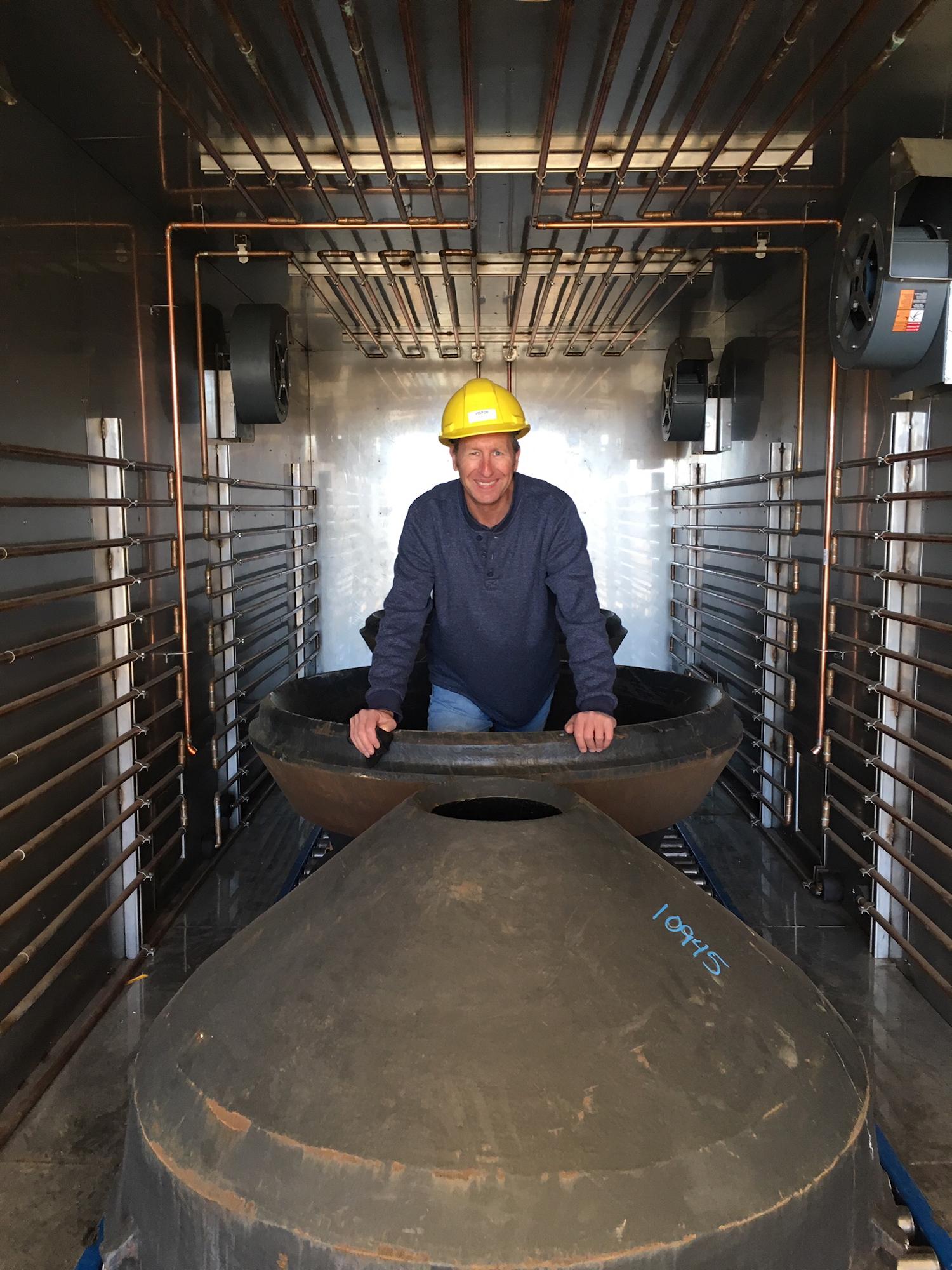