East Texas Heat Treating History of The Start Up & Logo

(Editors Note; This was written by Mr. Duane Heinrich Thermal Processing General Manager with Metal Finishing Company in Witchita, Kansas, USA. In the photo below Duane is on the left and John Hubbard of Bodycote fame is on the right).

In 1997 I had come to cross roads personally and professionally. I had started my Heat-Treating career at Frank’s Hard Facing at the ripe age of 15 and worked 21 years for Williams Rock Bit/Smith Gruner/Smith International acquiring more advanced heat-treating skills under the tutelage of Jack Wintermute and Wayne Quantz, 2 of the finest metallurgists I have ever met, in an in-house heat-treating environment.

I met an excellent instructor, mentor, and metallurgist during a class “Metallurgy for the Non-Metallurgist”. His name was David Pye. David and I became friends very quickly. Mr. Pye called one day with an opportunity in the captive heat treating located in Gladewater Texas for a company named Sampson Industries.

Sampson Industries had decided to get into the heat treat business to be able to heat treat H13 extrusion tooling made for various industries, but soon came to the realization that they would need to find other heat treat to process to cover the cost of their substantial investment. They contacted David Pye on training members of their team to become heat treaters and after accessing the skill sets of selected team members David convinced them that they needed an experienced heat treater to be on site to build the heat-treating team. They agreed and David scheduled an interview with the Sampsons.

I arrived in east Texas on 7/11/97 for the interview. We met at the proposed site for the heat treat facility which was a 200’ x 400’ lot. The lot was grown over with weeds and brush. They explained that they had ordered a 36x72x36 Surface All Case integral batch furnace with oil quench and top cool, 2, 36x72x36 tempers, 36x72x36 spray/dunk washer, and a Surface 2500 CFH Endothermic Generator in April and equipment was scheduled for delivery in October. They had several employees they were volunteering to operate the equipment, but there was zero heat treat experience to draw from. After hearing their offer, I saw a tractor with a brush hog attached and asked them if they minded me mulling over the situation and offer while mowing the lot. After clearing the lot of weeds, brush, and debris I accepted the challenge.

As the building went up and we waited on the equipment to arrive, we put ads in the area papers for personnel. We found 3 gentlemen to fill the 3 shifts and put them on various duties around the parent company and working with the contractor erecting the building. We hired a local gentleman to drive our truck, as we got closer to the equipment being installed and ready to process materials. The day came when all was ready to begin processing material, but we had no orders in house. I gave the driver my card and told him to hand them out at all the machine shops in the area and ask if they had any heat treat to pick up. He came back the 1st day with 2 pallets on the truck. I called the companies and let them know that we had the parts. I asked if I could quote the parts, as we were capable of processing and they took a verbal quote over the phone, we proceeded with processing our first commercial order. This continued for several weeks and word of mouth got around that we were competitive on pricing and turned parts faster than the other options available.

David Pye was essential in setting our lab up and I basically created the router and quality system with the help of an IT expert that worked for Sampson industries. We had a part time receptionist who also took care of our billing. Our staff was very lean, but highly efficient operating 5 days a week with weekend expediting an option if given enough notice. We were breaking even after the first 30 days of operation and were now making a weekly run to Houston picking up a truck load of fasteners to be processed.

We determined we needed a logo for the heat treat facility. After several nights discussing the design which started out with a Texas Ranger badge look it progressed in to the one below with the state of Texas and a flame over where Gladewater was located. Ken Sampson came up with that final piece – “East Texas Heat Treat”, we created our logo. The sign was cut out by hand with a cutting torch and hand ground where possible with a hand grinder. The rustic coating was one used in corrosion coating building beams and bridge beams the parent company built.

Jerry Luce of Metroplex Heat Treating (Now Bodycote) fame helped our little heat treat out by vacuum processing 400 series stainless material for us. We did not have vacuum capability, so myself and Ken Sampson drove to Metroplex and met with Jerry. Listening to his story on how he got started with his business and how it was grown was an awesome experience and let us know that what we were doing was possible. We came to an agreement that day and never forgot the help Mr. Luce offered us.

As with all heat treats you have to put money back into the business to keep the growth going and to keep profits coming in. This required planning and focus on the goal. Unfortunately, the ownership was not able to commit to the long haul on this operation. The business was put up for sale and my duties were to find a partner or another company to purchase us. Hi TecMetal Group was one of many to look at the facility, with Terry Profughi himself visiting and meeting with ownership and John Hubbard (of Hinderliter Heat Treating) also visiting as well. At the end of the day no deal could be made and Jerry Luce ended up purchasing all the equipment, along with the sign on the building.

As history would have it, John Hubbard and Bodycote ended up with Metroplex Heat Treating and the sign ended up in his possession. In 2018 John made me aware of the sign being in his possession. He offered it to me, but I could not find my way to Dallas area to pick it up, but was always in the back of my mind that I needed to retrieve this sign, as it was my 1st heat treat logo I had been a part of designing and also was part of my heat-treating legacy that I needed to have in my possession.

I contacted John Hubbard and inquired if the sign was still available? He stated that he knew where it was and would check to see if there was a way I could acquire it. Mr. Hubbard stated that a friend of his Jonathan Maffeo had the sign and was displaying in his house as wall art and that he would indeed part with the sign. A date and time were set up for the pickup. The sign is now with me in Wichita, Kansas where it is now at home. 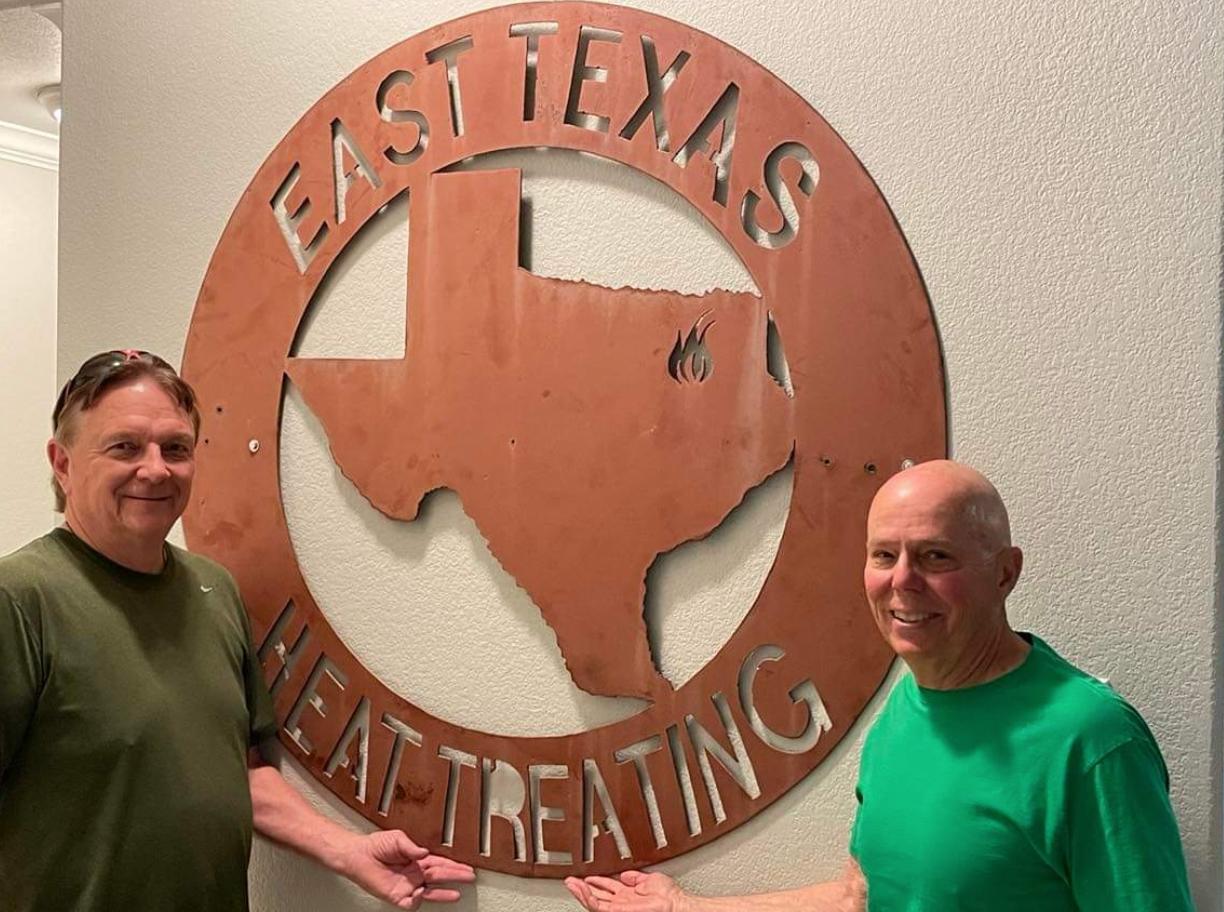