The largest heat treat exhibition in North America in 2020 is the MTI sponsored Furnaces North America show scheduled for September 30th to October 2 in Louisville, Kentucky, USA. As most in the industry are aware this show has gone the route of all trade shows in 2020-it is now virtual. Perhaps though all things happen for a reason as you can see in the story below.

“LOUISVILLE, Ky. — Police put up concrete barriers and fencing. The mayor declared a state of emergency. More businesses nailed plywood to their storefront windows. Downtown Louisville’s preparations and closures seemed more reminiscent of an approaching hurricane than a grand jury decision. Louisville is bracing for an anxiously awaited decision on whether any police officers will be charged in the March 13 shooting death of Breonna Taylor, the 26-year-old unarmed Black woman fatally shot by police who has become a national symbol of racial injustice. Downtown streets were eerily empty after police erected barricades Tuesday in a 25-block perimeter to limit car traffic, including around a park that’s been home to nearly four months of protests over the fatal shooting. Protests in the city, since they began the last weekend in May, have remained largely peaceful, occasionally marred by violence, tear gas and pepper balls.

Louisville Metro Police interim Chief Robert Schroeder said the restrictions, long planned amid “unprecedented times,” were meant to protect public safety, property, protesters and avoid conflicts between drivers and demonstrators. Protesters will still be able to access downtown on foot to demonstrate, he said. “In the community, we’ve all heard the rumors. We all know something is coming. We don’t know what it is,” said Schroeder, whose spokesman said Tuesday there had been no viable threats of violence. “I hope all of this is not needed.”

Mayor Greg Fischer issued two executive orders Tuesday. One declared a state of emergency due to the potential for civil unrest, which allows him to exercise such emergency powers as enacting a curfew, and a second one restricts access to five downtown parking garages and on-street parking. If large protests do erupt, police won’t use tear gas unless approved by the chief or deputy chief, or if gunfire erupts, police said — among several policy reforms enacted since the March 13 shooting of Taylor.” 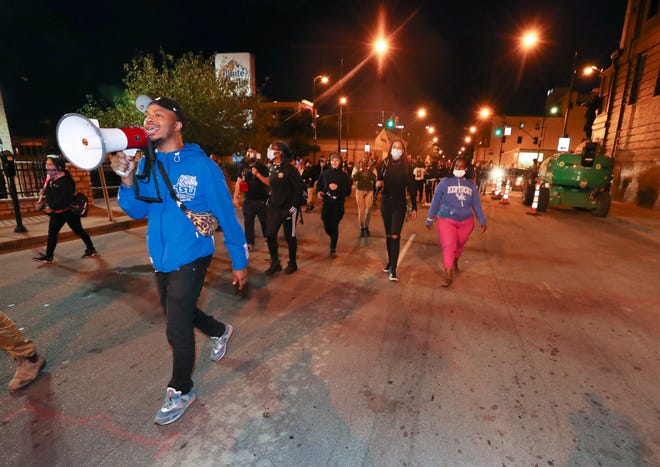