Written by Rolf Terjung. Furnace fixturing made of CFC (carbon fibre reinforced carbon) are the state-of-the-art standard in vacuum heat treating these days. A significant quality feature of the vacuum heat treating process is the shape and dimensional stability of heat treated components. This article focuses on the impact of CFC fixtures and how they help to reduce the distortion of case hardened parts in Low Pressure Carburizing (LPC) applications with High Pressure Gas Quenching (HPGQ). These results provide evidence that distortion of heat treated components can be minimized and controlled by the use of individually designed fixtures made of CFC material.

In various studies [1], the vacuum heat treatment technology known as low pressure carburising (LPC) followed by high pressure gas quenching (HPGQ) for case hardening components has shown that shape and dimensional changes in heat treated components can now be controlled to the extent that the subsequent hard machining steps can be reduced or even eliminated entirely. This is a key factor in reducing throughput times and the costs of component manufacture. The advantages of the method [2] can be used in particular for large surface gear parts requiring complex machining. Due to the high quality requirements (shape and dimensional tolerances, hardness parameters), case hardening using LPC and HPGQ technology was selected for the internal ring gear that will be used in the manufacture of a new 6 speed automatic transmission. The tests were performed in a ModulTherm system (ModulTherm is a brandname of ALD Vacuum Technologies GmbH).

METAL VERSUS CFC FIXTURE. Due to the component geometry and small cross-section, shape and dimensional changes are to be expected in the ring gear. In an optimisation process, the furnace manufacturer and the customer defined the heat treatment parameters in order to minimise heat treat distortion [1]. Heat treatment cannot influence distortions caused by residual stress released during the production chain, ranging from the metal and the blank to the soft machining of the internal ring gear. Full furnace loads comprising multi-layer (3D batch) batches (Fig. 1) are heated to the treatment temperature by convection (N2) and vacuum. In order to achieve a penetration depth of 0.3 – 0.5 mm, carburisation using acetylene took place in vacuum at approx. 900 °C. The workpieces were then cooled to the austenising temperature and quenched with helium [1]. Extensive preliminary experiments had shown that the distortion results were better for helium than for nitrogen although, due to its relatively high carbon content and the small component cross-section, steel grade AISI 5130 would be suitable for nitrogen. The process cycle is described in [2]. High alloy metal and CFC fixtures (graphite fixturing) were used. The distortion criterion is the lead average variation and the concentricity deviation. Distortion was investigated in 15 parts that were positioned at various points in a charging level and that were taken from different layers. The results of the dimensional lead changes are shown in Fig. 2. Fig. 2 illustrates the mean values and the scatter of the lead average after heat treatment with different parameters with reference to the untreated “green” values. After charging on a metal fixture with standard gas quenching, the average value increases compared with the “green” state, however, scatter increases significantly and exceeds the lower and upper limit of the specification. When changing to the CFC fixture, scatter falls significantly by 50 %. If the quenching process is also optimised by means of gas pressure and/or gas speed (dynamic quenching) while retaining the CFC fixture, the average values can be reduced and scatter confined so that it lies within the specification [1]. In addition, studies have shown that the distortion of the parts was independent of their position on the fixture level and layer. The heat treatment process became ready for series production in June 2006. Since autumn 2008, distortion values have only been checked on a random basis. As a result of continuous optimisations to the quenching process and CFC fixtures, these ring gears are today fitted straight into the transmission without hard machining. 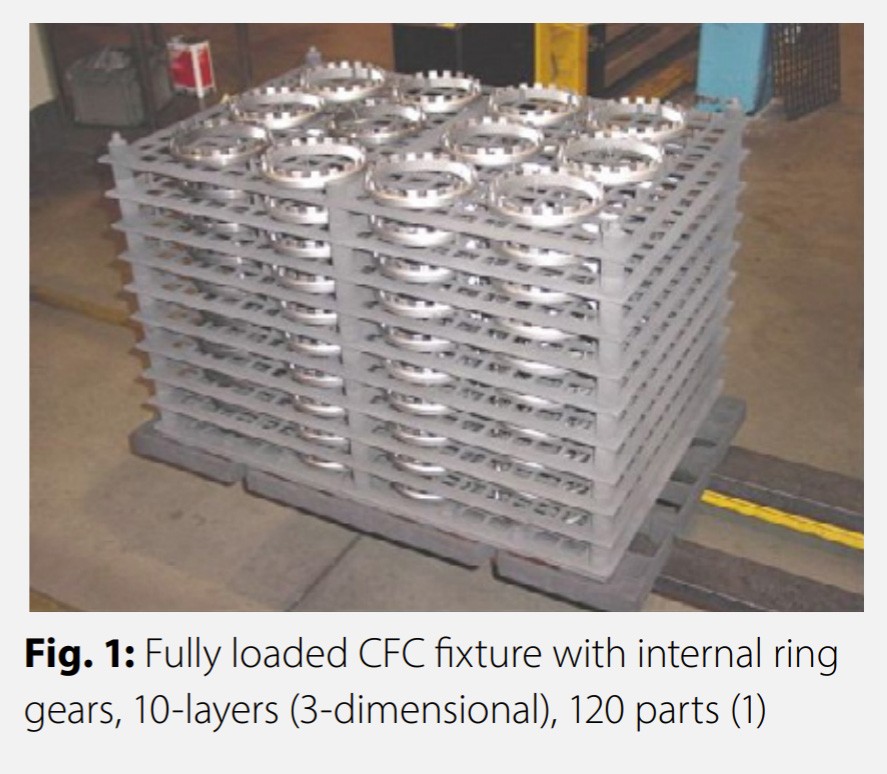 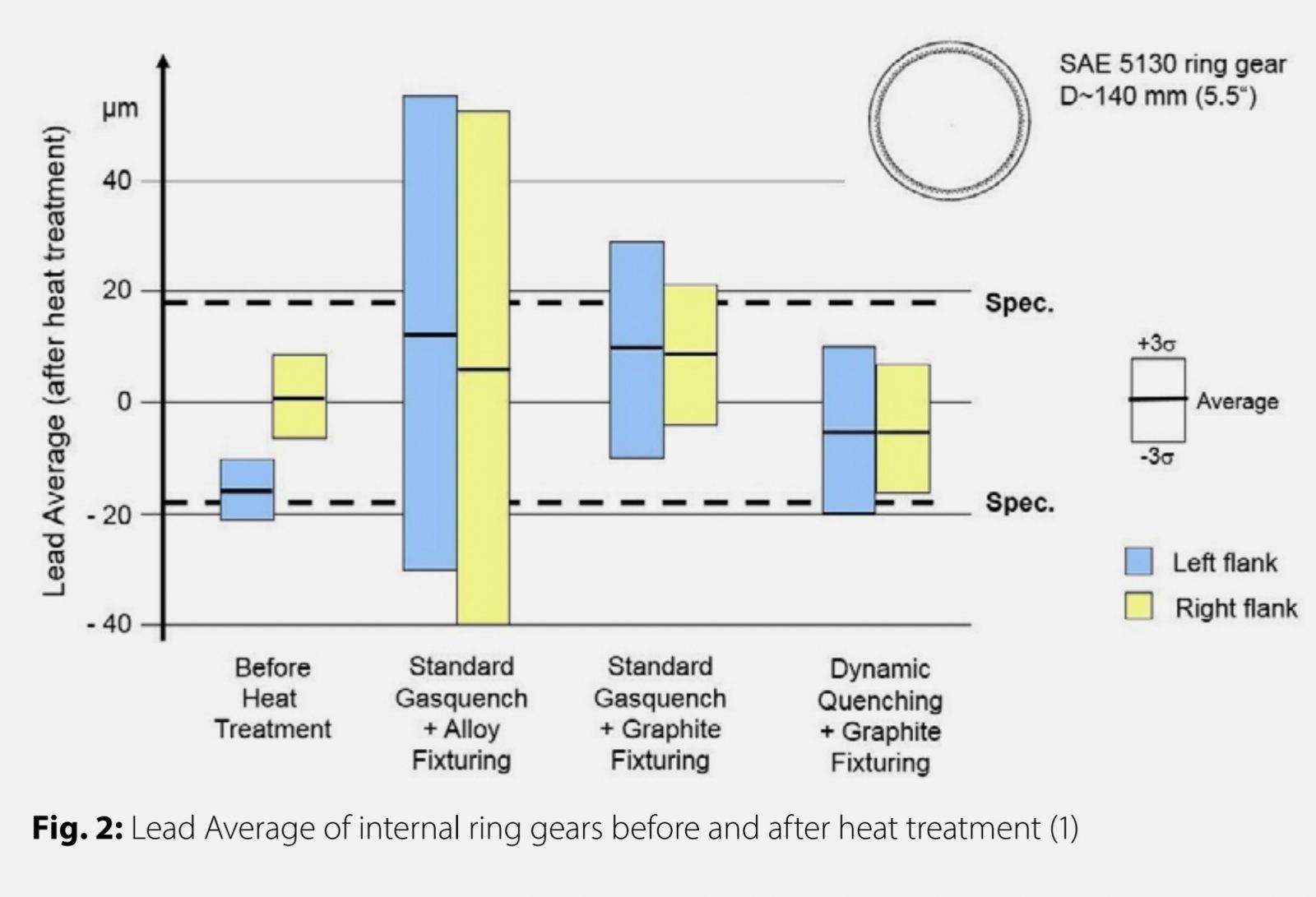 INFLUENCE OF CFC MATERIAL PROPERTIES ON SHAPE AND DIMENSIONAL CHANGES

The reduction in scatter for both distortion criteria when switching from metal to CFC is notable. Due to the higher strength and lower density, the weight of the CFC fixture is only about 10 % of the comparable metal system with the same load bearing capacity. For the quenching process, the lower fixture mass means quicker and more uniform cooling. The lean design reduces the component’s contact areas and support points and minimises shadow effects during carburisation. At the same time, due to the reduced surface resistance (cW value), the flow-through of the cooling gas increases. At junction points and other thickenings of the material, no significant residual heat is stored that can be returned to the workpieces. Due to the reduced, “non-value-adding mass” of the fixture material, distortions (heat induced stress) are minimised even during the convective heating phase (1). Components are heated more uniformly and quickly. A CFC workpiece fixture only consumes about 20 % of the energy compared with an equivalent metal frame (Fig. 3). Taking into account the expansion coefficients of the two materials at 1.000 °C (CFC: 1*10-6/K, metal: 12*10-6/K), the CFC fixtures retain their shape. Deformations of the workpiece fixture, which are transferred directly to the components, can be disregarded. An extensive presentation of the CFC material properties and how they can be used for CFC workpiece carriers is described in (4). Some of the key material properties that make CFC suitable for vacuum heat treatment are given below: 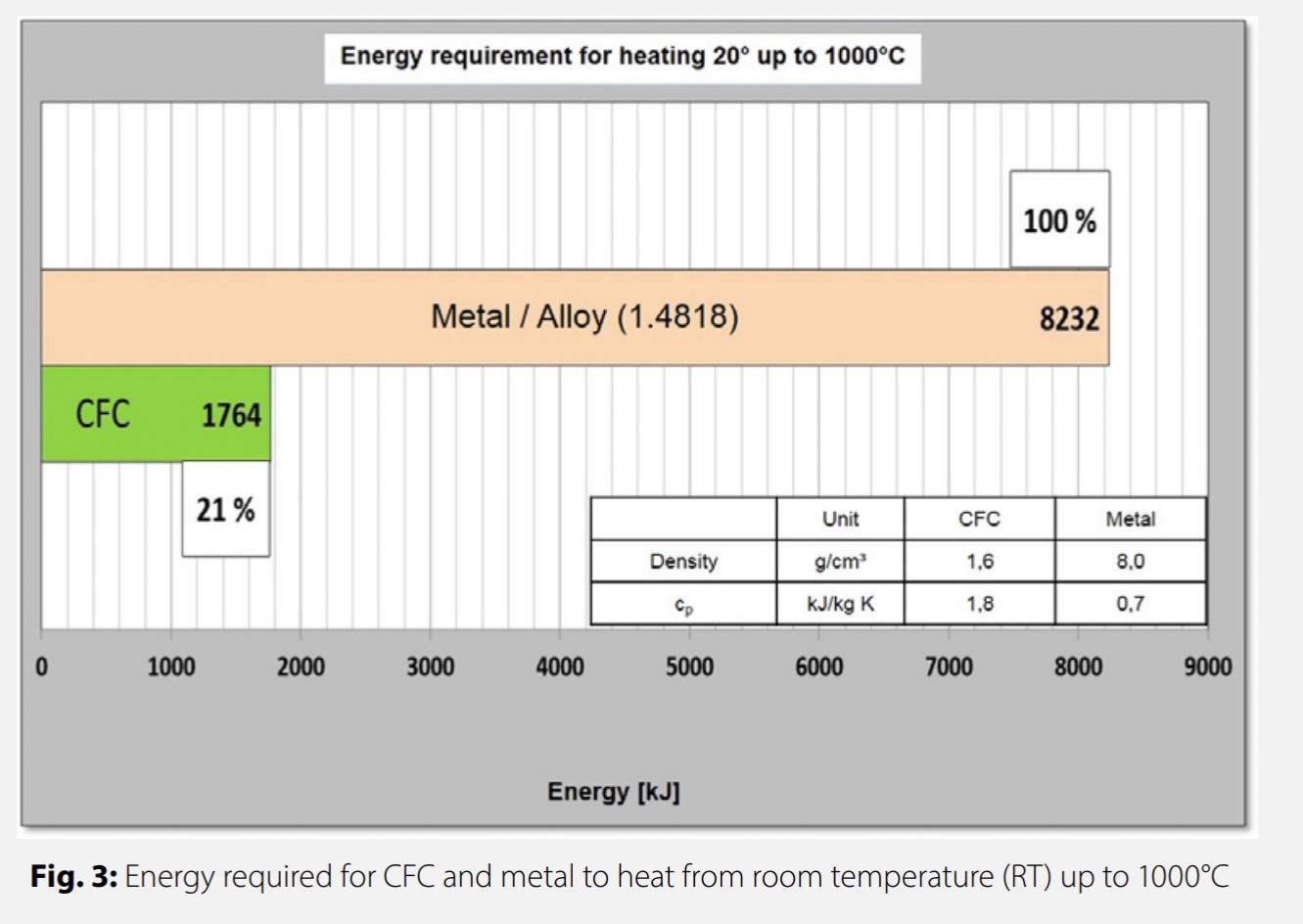 Example 1: Input shaft In recent years, the continual demand for high precision components with minimum distortion and reduced manufacturing costs has led to an optimisation of the plant technology for low pressure carburising with high pressure gas quenching. Directly integrating heat treatment in the soft and hard machining production line has reduced the throughput times of the parts and so made the manufacturing process both more effective and more economical. The target of integration is the so-called one piece flow [5]. The workpieces are now only charged in a single layer (2-dimensional) and synchronised with the up- and downstream process [3]. The components are heated and quenched more quickly and uniformly than 3-dimensional batches. The mass of the workpiece fixture is greatly reduced so the thermal energy can be transferred directly to the components. During cooling, the cooling gas flows past the component in such a way that the heat is extracted directly and uniformly. This enables part-specific heat treatment that, on the one hand, leads to a reduction in the process time and, on the other hand, to an increase in quality in the form of reduced shape and dimensional changes [5]. In order to make best possible use of the advantages of the technology, a CFC fixture was used and fully loaded with 30 shafts. The distortion criteria were axial runout and concentricity for carburising temperatures 960 °C, 1.000 °C and 1.050 °C. In order to obtain the smallest possible distortions, two different ways of part orientation were tested: hanging and standing. The distortion results for axial runout, as the critical dimensional deviation for use of the shafts, are summarised in Fig. 4. The maximum values, the average deviation and the standard deviation are shown. The best results are obtained with “standing” positioning and the specification of 40µm met for all three treatment temperatures. This example also shows how, due to the low fixture mass and good flow properties, the CFC workpiece fixture supports the low standard deviation values [6] and so makes a considerable contribution to process reliability. The common element in the studies to reduce form and dimensional changes as cited in this article is that both a quick and uniform heat supply and the targeted flow of the cooling gas to the components are essential for minimum component distortion. In addition to the structural design of the quench chamber, the way in which components are loaded in the CFC fixture is extremely important. When the “standing” batch loading of this input shaft had been found to be optimum, the workpiece fixture was modified in accordance with the following design criteria:

The result is shown in Fig. 5. In series production, loading of the components and also batch loading in the treatment chamber are performed automatically by a robot. Example 2: Thin-walled ring The thin walled ring was case hardened in vacuum on a single layer CFC fixture. The circularity achieved was insufficient for series production. The component was repositioned using a fixture that had been optimised for the ring, taking account of defined criteria (Fig. 6). 700 rings from different batches were measured and evaluated after heat treatment on the optimised fixture. The results of the circularity deviations are summarised in Fig. 7. With part-specific fixture design, it was possible to reduce the maximum circularity deviation by 25 % to 0.3 mm and the average deviation by 50 % to 0.12 mm. The deviation values measured for the 700 parts were within the lower (UG) and upper limit (OG). No rings were rejected. The new fixture design was released for series production and implemented as a new standard. 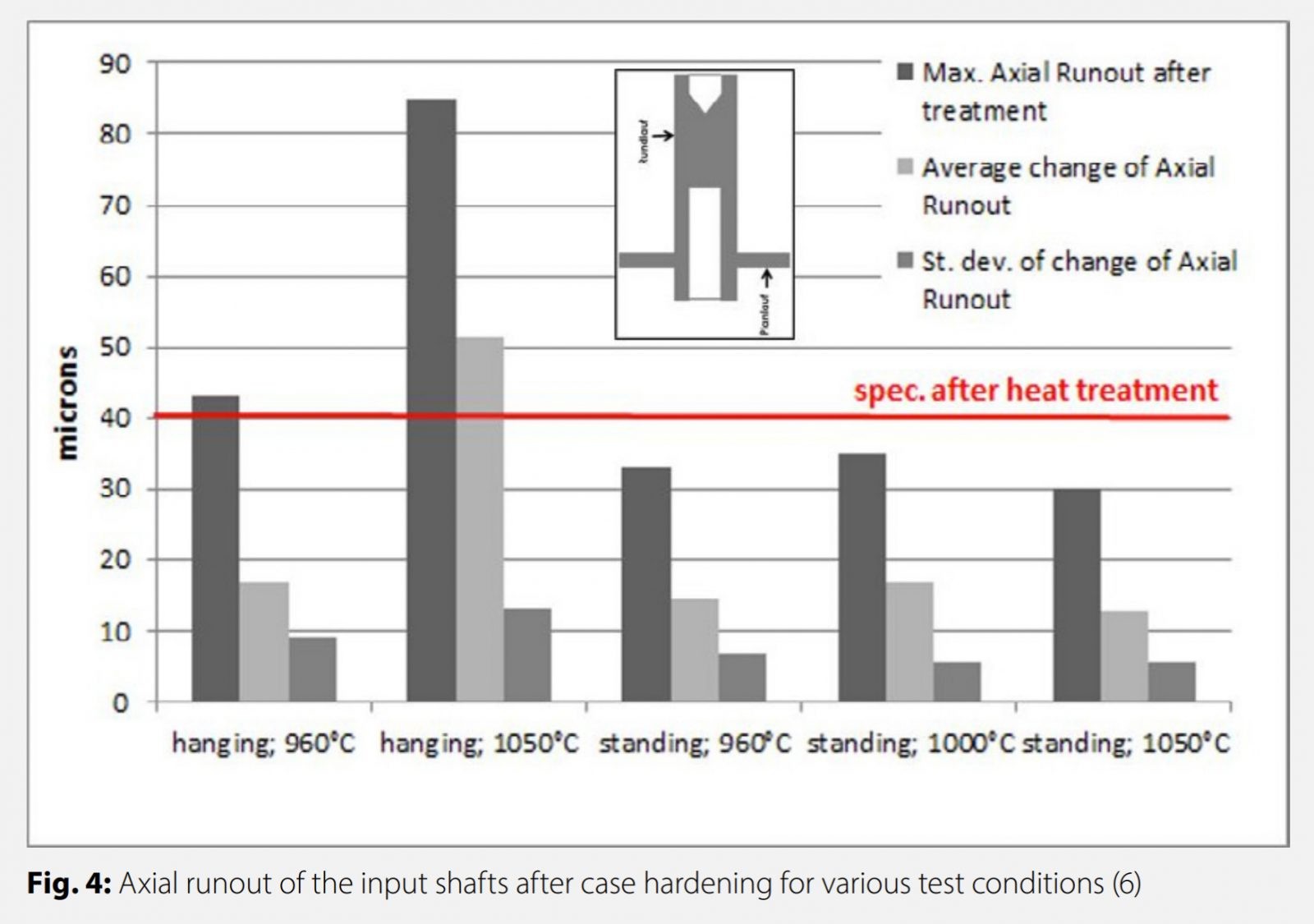 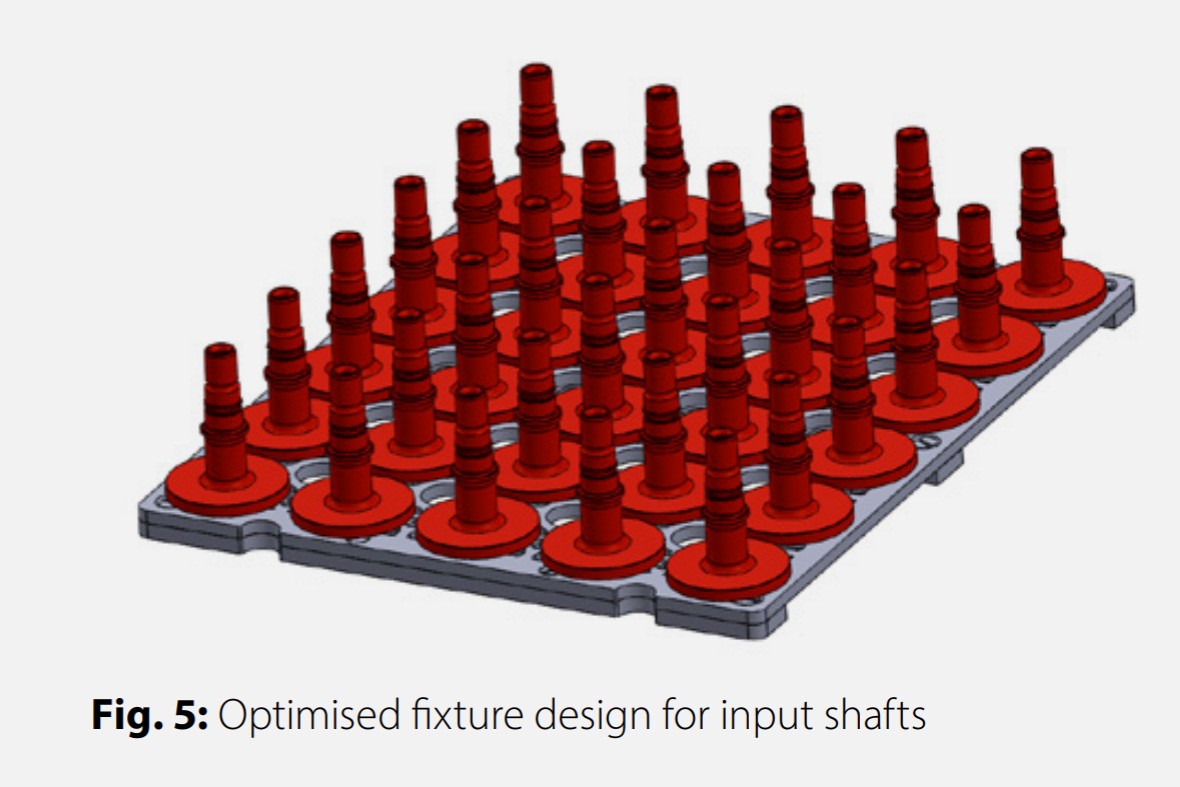 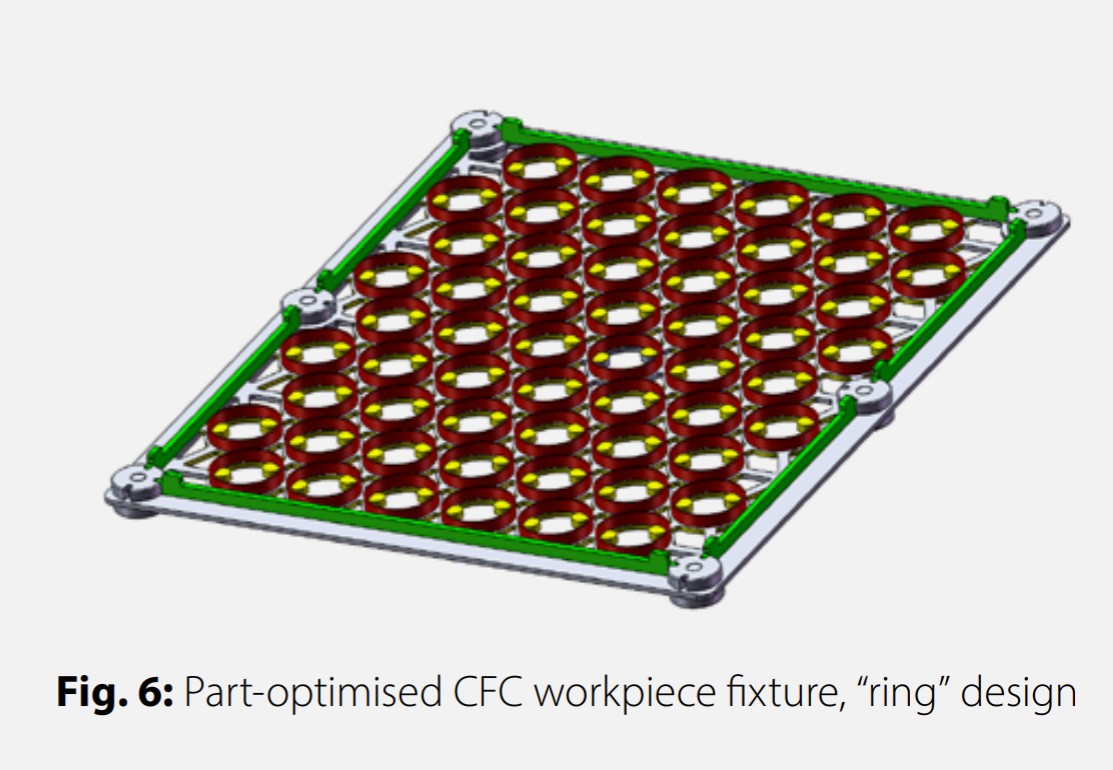 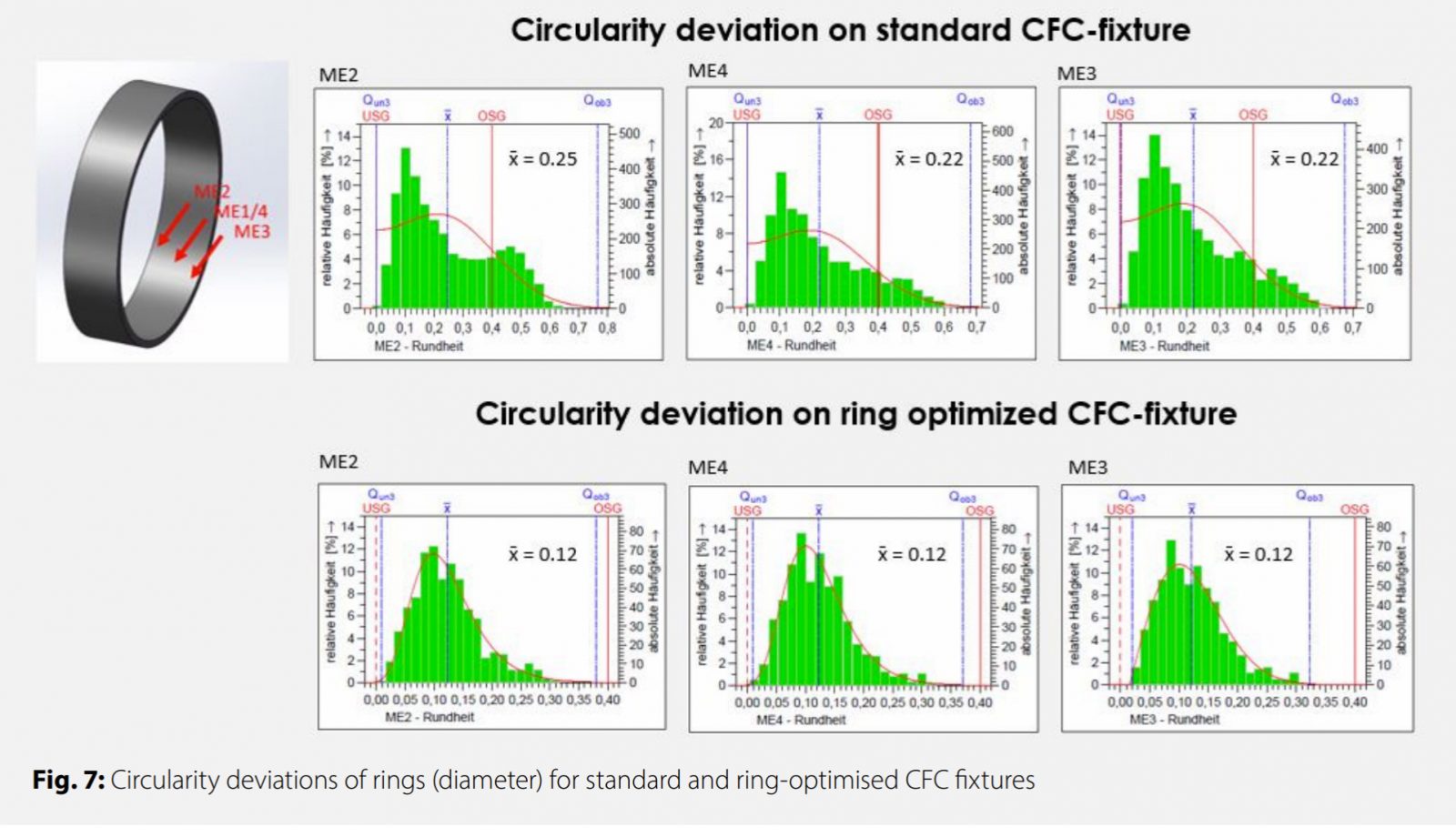 Controlling heat treat distortion is of key importance in order to reduce production costs for complex components, e.g. in gear manufacture. Heat treat distortion of gear components with a high amount of machining and thin-walled cross sections can be controlled by low pressure carburising combined with high pressure gas quenching. By using CFC workpiece fixtures together with various process variants (e.g. dynamic quenching), shape and dimensional changes can be reduced to such an extent that, in individual cases, hard machining can be eliminated completely. The standard deviation of the average distortion values, as an indicator for controllable, reproducible shape deviations, is supported significantly by CFC fixtures. The further refinement of the method from 3D to 2D loading shows how process innovations and part specific CFC workpiece fixtures can lead to a further reduction in distortion. Process reliability is increased and production costs are reduced. Micro-alloyed steels have recently been developed that prevent grain growth even at high carburising temperatures of up to 1.050 °C. This development is only possible on CFC fixtures that ensure uniform workpiece heating and cooling.