The “chip” shortage and its effect on automakers around the world has been well documented over the course of the last number of months-the article below from “Driving” Magazine has as good a summary as any we have run across. The assembly slowdown has in turn effected all captive and commercial heat treaters of automotive components leading to massive financial penalties, penalties which might last until 2023 according to this article.

We will start with the basic premise (largely agreed upon by all in the heat treatment industry including Industrial Heating) that the overall heat treatment market including captive and commercial heat treaters is worth approximately $22 Billion USD in 2020. Of this total it is estimated that roughly 30% is dedicated to the automotive industry which leads to a figure of roughly $6 Billion USD-a truly breathtaking number. Even a small reduction in this number means a very substantial reduction in the amount of automotive heat treating happening in North America in 2021-certainly in the hundreds of millions of dollars.

This reduction in the amount of automotive heat treating has been confirmed to “The Monty Heat Treat News” from automotive parts suppliers and commercial heat treaters across the continent. The good news is that there is very significant pent up demand for new vehicles and when the shortage is corrected as it will be production will surge to meet the demand. The bad news is that it does not appear that there is a near term solution.

“The semiconductor shortage continues to affect the auto industry, with news that the Jeep Gladiator is the latest vehicle halted in production due to the issue. As reported by The Detroit News, the company’s South Assembly plant in Toledo, Ohio will temporarily stop assembly of the off-road truck because of the global chip shortage, which has affected almost all automakers to some degree. Production of the Jeep Wrangler, built at the Toledo North Assembly plant, will continue.

The chips are required for numerous functions, including infotainment systems and engine management. The shortage is a direct result of the pandemic. When vehicle sales fell, automakers cut production and subsequently ordered fewer chips. The chip manufacturers diverted the supply to the electronics industry, where sales soared as consumers bought devices for stay-at-home work and entertainment. It isn’t easy to ramp up chip production, and when car demand returned and automakers started building again, the chip manufacturers continued to prioritize the larger orders from their electronics customers. No one’s really sure how long the shortage will continue, with some companies estimating mid-2022 or as far out as 2023.

General Motors idled some of its pickup truck production in North America, but according to Automotive News, will also restart production at its truck plants in Michigan, Indiana, and Mexico for the first week of August. But it’ll come at a cost for some car and SUV production, with extra downtime added to some of those plants — including one that hasn’t operated in nearly six months — so the chips can be diverted to the hotter-selling trucks and full-size SUVs. Earlier this year, to save chips for more vital functions, GM removed cylinder deactivation, a fuel-saving technology, from some of its truck engines; and more recently ceased adding start-stop technology, which automatically shuts the engine off at idle and then restarts it for driving, which reduces fuel use and emissions.

Ford dealt with the shortage by continuing to build and stockpile F-Series trucks that were missing the vital chips. Early in July, it reported that it had received a supply of semiconductors, which it was putting into thousands of these stored trucks —– the exact number not divulged –— so they could be shipped to dealers.” 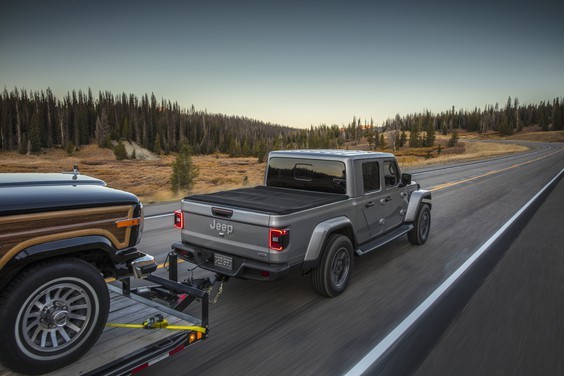