An Introduction To The Carburizing Process

Basic Simple Principle of Carburizing.Carburizing is not a new process.  Its presence has been known since mankind began to work iron, which was approximately 4500 years ago. Copper mining and the working of copper can trace its origins back some 8,000 years. Carburizing is perhaps the oldest of all the major surface treatment processes. It is a process has been around for many centuries, and will continue to be around for many more centuries. A process led the way to steel making, simply by forging iron in a fire. The fire, (made from wood and charcoal) provided the source of carbon (Carbon Monoxide) and the carbon diffused into the surface of the iron.

The forging was continued, the hammering continued. The iron was re-heated and more carbon diffused into the iron, until it eventually became steel. Then it could be heat-treated to whatever hardness was required, for fighting sword, a headman’s axe or whatever weapon of war was required. Therefore, it can be said that the process of carburizing was the process that led to the development of steel. 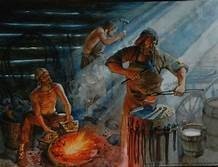 One would ask the simple question ‘why carburize?’  Why is it necessary to carburize? What are the advantages and disadvantages of the process? Before one can carburize many engineering issues are necessary to be discussed and determined. Once these issues have been identified and settled upon, then the selection of the method of carburizing process can begin. There are essentially 5 methods of carburizing; 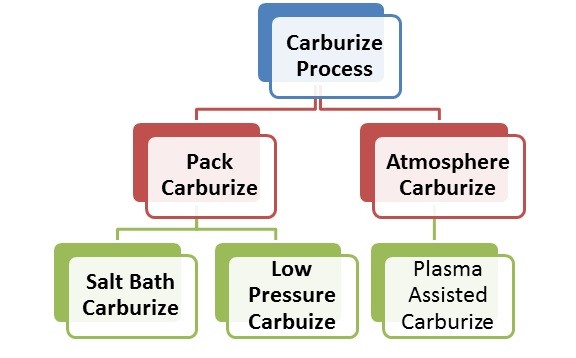 Summary of Carburizing Process methods. Is one process method better than another is? Which is the best to use?

That will depend on the products use, its performance requirements and of course the environment that it will operate in. There are many reasons to carburize, versatility of the process technology of carburising in terms of accomplished mechanical properties.

In essence however, one is creating 2 different steels out of one steel analysis, simply by diffusing carbon into the steel surface of the selected steel analysis. This then, will create a steel with different mechanical and metallurgical properties as shown below; 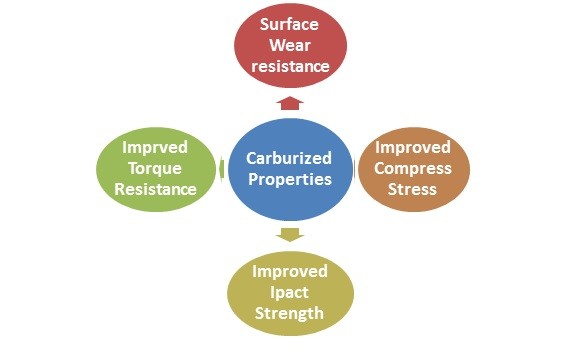 Summary of Mechanical Properties of Carburizing. There are many choices and considerations that one must make before finally   selecting the appropriate process of carburizing:

A process has now been established to create a component with a combination of high surface hardness and good core   hardness that will now function and taking advantage of surface a hard surface that displays a compressive residual stress at the surface and with a hard surface. It is known that wood is a hydrocarbon material and when burned will produce a carbon rich gas.

Early man was carburising without realizing it. Early man  had unconsciously begun the carburizing procedure. Process Methods; Pack Carburizing. In today’s process technology, we know the method that early man was using, is now known as pack carburising.

Pack carburizing began to emerge as a process technology during the latter part of the 19th Century and early 20th century. It was perhaps the first attempt to bring into the procedure, a level of surface carbon potential control made adding certain product control  chemicals into the carburizing granulate.

The following illustration shows the cross-section of a simple steel box type constructed process furnace, which provided the heat source for the carburising procedure. Within the interior of the furnace is placed a steel container which carries both the carburising medium and the steel which is to be carburised. The steel container is sealed with a lid which is further sealed using either fireclay or mud. 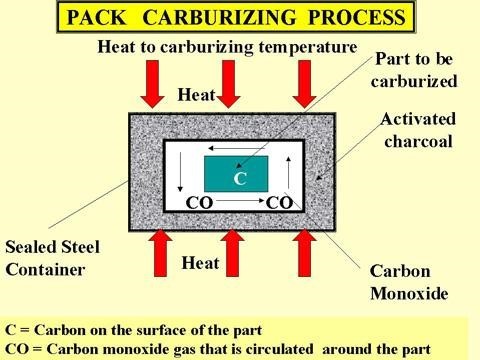 The very simple carbon rich source that is used for the Pack carburising procedure is that of simple charcoal. 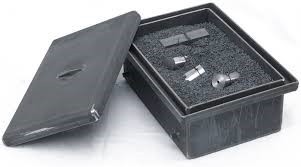 A simple carburizing box made from Heat Resisting Stainless Steel. Typical Pack Carburizing Mediums. Wood charcoal (will produce a carbon rich atmosphere, but with no knowledge of the carbon output)

In this presentation, we are focusing our attention on the pack carburising method. The pack carburising method relies on the use of a carbon rich material. One can also make use ordinary charcoal,(such as barbecue charcoal). However the carbon output from the charcoal is never consistent. Companies did at one time manufacture their own brands of carburising granulate which consisted of charcoal, and an activator known as Barium Carbonate.

The process method produces the release of carbon monoxide (CO) which is derived from a solid carbon source. This activity is initiated at the surface of the steel to be carburized. The resulting decomposition is nascent carbon and carbon dioxide. The action is to release the carbon monoxide which is caused by thermal activity (temperature/heat) on the carbon rich source material.

The activity is assisted by an Energizer such as (previously stated) Barium Carbonate (BaCO3) or potassium carbonate (K2CO3), or sodium carbonate (NAaCO3). The energisers (whichever one is utilised) are present to aid the initial production of CO2 from the carbon rich source material resulting in the formation of carbon monoxide (CO) which is the active gas at the surface of the steel being carburized. 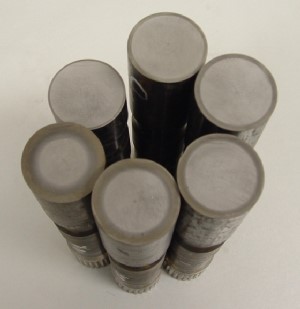 Test coupons carburized, the dark outer ring is the carbon which as been diffused into the surface of the steel. 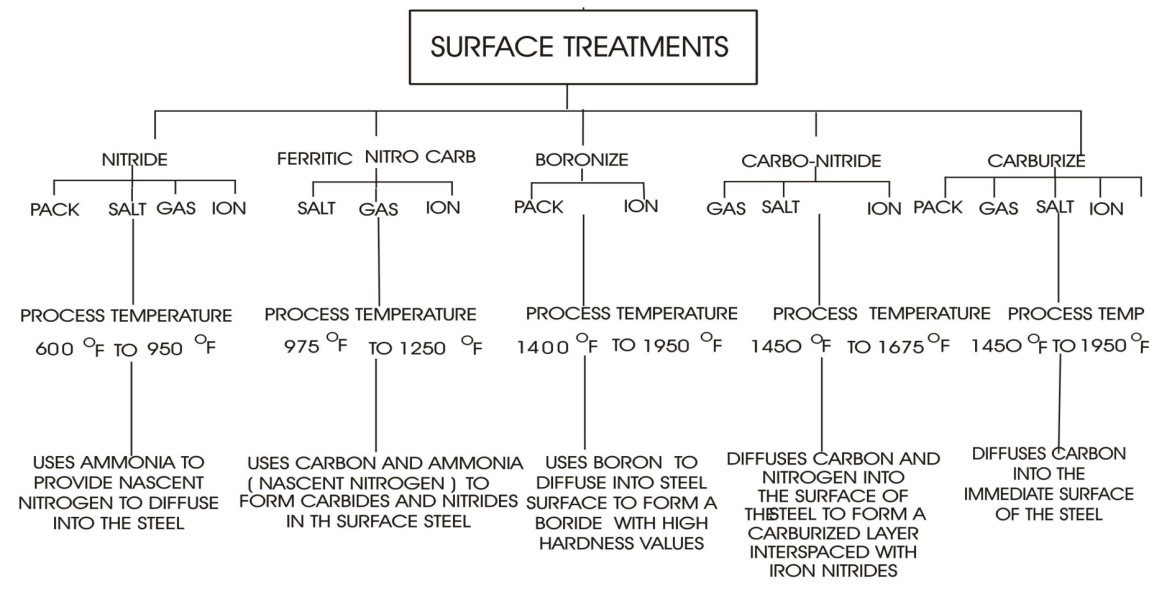 A summary of the Thermal Surface treatments.